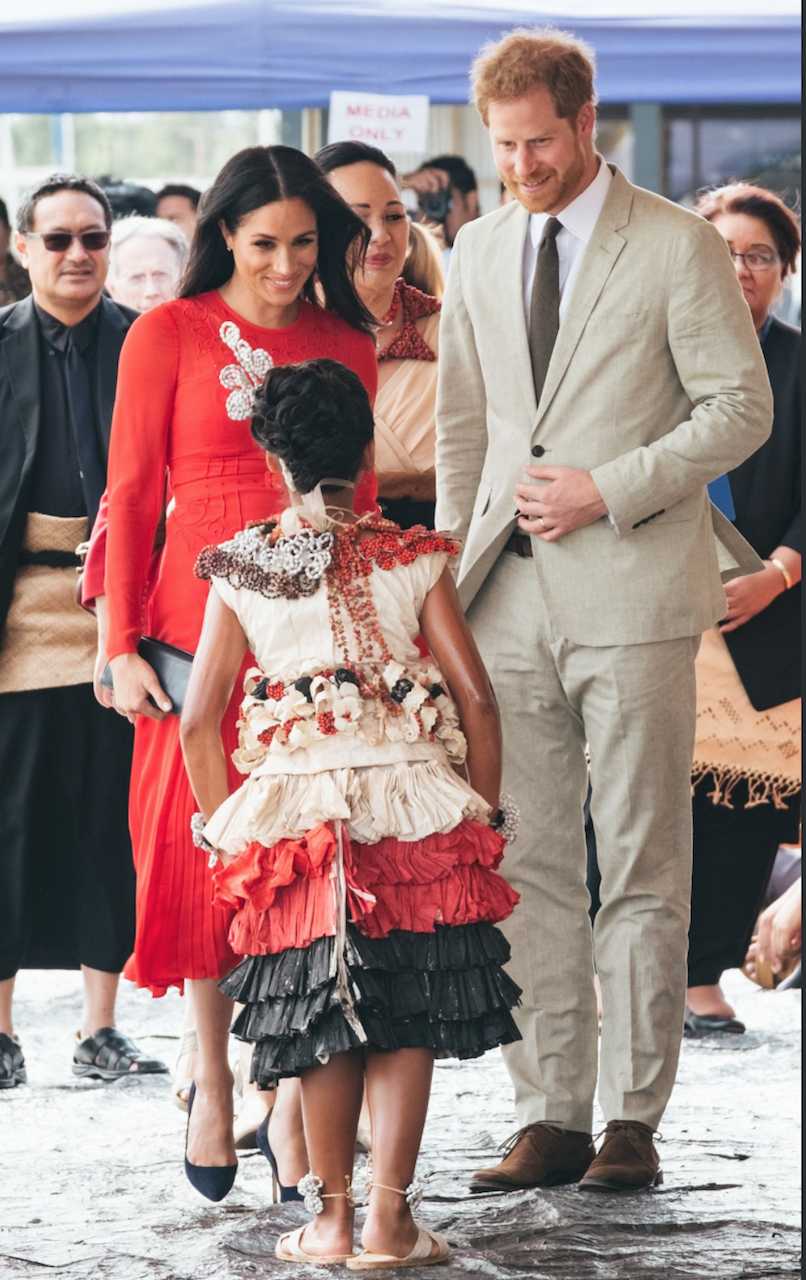 Meghan Markle and Prince Harry keep Royal Tour going as they return to Sydney after visits to Fiji and the Kingdom of Tonga. The Duchess of Sussex and Prince Harry dodged one since their pilot during their flight back to Sydney made a failed landing and thus exposed the Royal Couple and the unborn Royal to possibly deathly consequences!

Everything turned out fine, though, and we’re glad to report that the Ducess of Sussex and Prince Harry’s Royal Tour is still going strong in Australia. In fact, Markle and her spouse even attend the closing ceremony of the Invictus Games in Sydney, Australia today.

Other Duchess of Sussex and Prince Harry Royal Activities

Earlier in the day, the Duke and Duchess attended the Australian Geographic Society Gala Awards at the luxuriant Shangri-La Hotel in the Australian capital. Murmurs circulating suggest that the Duchess flummoxed other attendees as she donned the most beautiful Oscar de la Renta dress imagineable – some went as far as saying that she looked as if she was shot right out of a fairytale cannon – Disney, take notice!

Meghan Markle is turning into the quintessential fashion icon of 2018. Her rise this year has been meteoric, catapulted from the drama-invested world of General Hospital’s Port Charles to the fairytale world of Royal life, Meghan is recently stealing the spotlight by making all the right fashion moves.

The Oscar de la Renta is but the latest move in a series of bold and eye-catching wardrobe moves – some of which might have involuntarily worked to garner the media spotlight of salivating news agencies worldwide. Who are we kidding, there was probably nothing involuntary about it. This is Meghan Markle after all, a polished, savvy and delectable media personality forged in the fires of American Daytime TV – she is well aware of cause and effect, and how each and every move affects the buzz of internet.

During the Duke and Duchess’ Royal Tour in Melbourne last week (Oct 22), Meghan was at the centre of the cutest moment ever – The Duchess of Sussex was approached by Gavin Hazelwood, a six-year-old, who melted hearts worldwide when he gave the Duchess his homemade pasta necklace. The Duchess was instantaneously charmed and put on the necklace right away. The kid, now, is a household name, barely a week later.

SPOILER ALERT: Don’t forget, we have the inside scoop when it comes to Meghan Markle’s due date month, check it out.

Check out Prince Harry address the crowd at the Invictus Games:

"The secret to the success of the #InvictusGames has been accepting that mental health is the real key to recovery." — The Duke of Sussex at the @InvictusSydney Closing Ceremony #IG2018 pic.twitter.com/xfJJMq49D9

Receiving orders for his work from around the globe, he now stands to make a name for himself in the fashion – and he’s just 6! His mom told CBS News:

“We had a lot of people saying to Gavin, you should make more, you’ll make lots of money from this, everybody will want to buy her necklace,”

Watch out for Gavin!

The Duchess of Sussex she helped close the Invictus Games 2018 in Sydney, Australia when she changed into a Antonio Berardi tuxedo dress. The olive green dress looked super sharp, as the former General Hospital and suits actress spoke to the jubilant crowd.