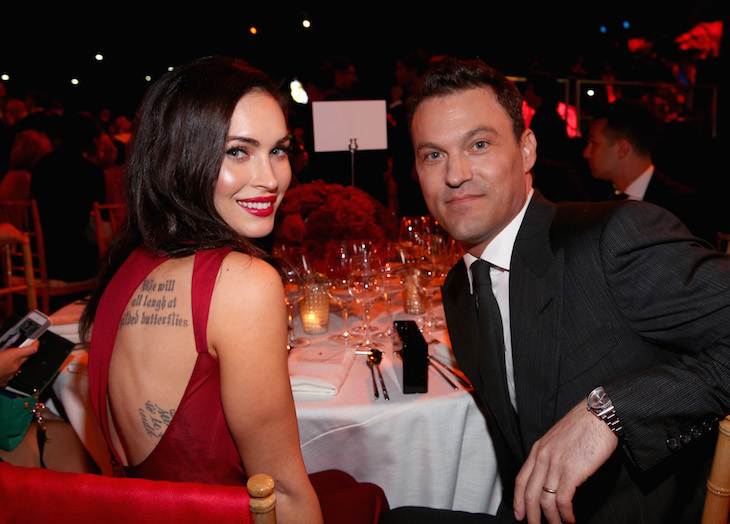 It looks like Brian Austin Green and Megan Fox are looking to have a mini-soccer team of their own at home! In fact, the Hollywood actor recently admitted that he and Megan are thinking about having a 4th child. This couple decided to save their marriage after Megan filed for divorce nearly two years ago.
Brian made the revelation during a Facebook Live chat with fans on Monday.

When asked whether or not he would want to have more kids with his wife Megan, Brian made it no secret that he would love to become a father again. In addition to his three boys with Megan – Noah Shannon, 4, Bodhi Ransom, 3, and Journey River, 1 – Brian also has a 15-year-old son Kassius from his previous relationship with ex Vanessa Marcil.

Brian said, “I have four boys now, a fifth is a basketball team. So that would be kind of awesome.”
And while a team of boys would be fun (if not hectic!), Brian did say that he would love to have a baby girl in the future. And with a gorgeous wife like Megan by his side, there’s a very good chance that their future daughter would be just as beautiful.

Brian added, “I want a girl. I really want a girl. I’m worried that if I try I’ll just get another boy. Not just because I love my boys, but I’ll have another boy and I don’t know if I’m ready for five.”

Earlier this year Brian also opened up about why he and Megan decided to fight for their marriage. He said the secret to keeping a relationship going is to simply not give up.

“I don’t know what the secret is. Just stick it out. Like fighting and making up, believing in each other,” he told People Magazine. “I’ve dated people before and you kind of get to that point where you go, ‘You know what, I don’t feel the same way,’ and I’ve never reached that with her.”