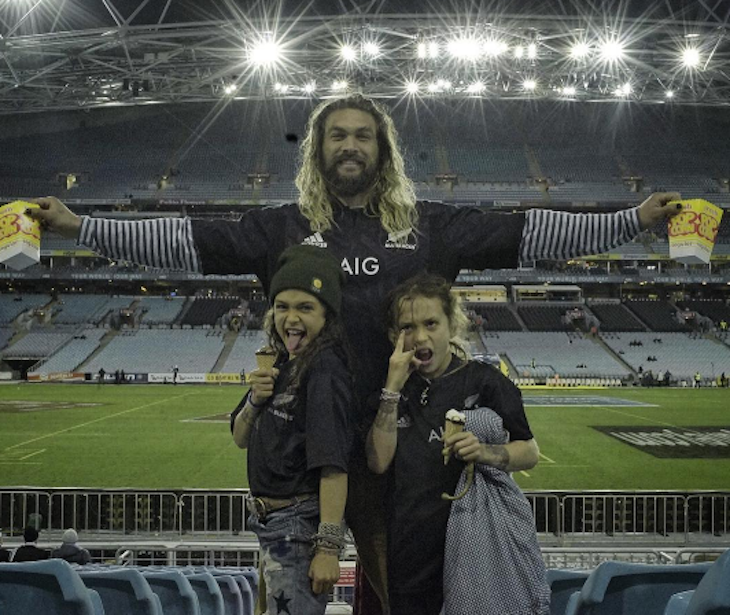 Jason Momoa has shared a rare but very adorable photo of him with his two kids! He shares his two children, Lola, 10, and Nakoa-Wolf, 8, with his wife, actress Lisa Bonet.

It’s without a doubt that Jason’s kids definitely get their spunkiness from their dad! In the photo, all three of them are putting on their fiercest faces while sticking out their tongues for the camera.

He captioned his photo with, “I simply love you more than I love life itself” listening to Elton with the loves of my life. Raising sensitive savages Priceless day on set proud to be aqua papa. OHANA.”
He captioned another photo with, “My lovees. My all blacks. My popcorn Happy papa. #missumama @allblacks Aloha.”The actor is also a step-dad to Lisa’s 28-year-old daughter, Zoe Kravitz.

Back in 2016, Jason opened up about his role as a father at home. He credited his mother for sharing her love of the arts and sports to him and now he wants to do the same for his two children. Jason says that he wants to lay out the same foundation in an effort to encourage his kids to develop their self-expression and creativity.

He also says that his most important priorities as a father is to make sure that his children are safe and to always be present in their lives. He also says there is a lot of honor that comes with his role as a father.

Jason told Outside Online, “If I teach them to climb then they can push themselves to the limits; gracefully move through fear and doubt.”

In the meantime, don’t forget to come back to CBL for all the latest news on Jason Momoa and all of your favorite celebrity parents right here!