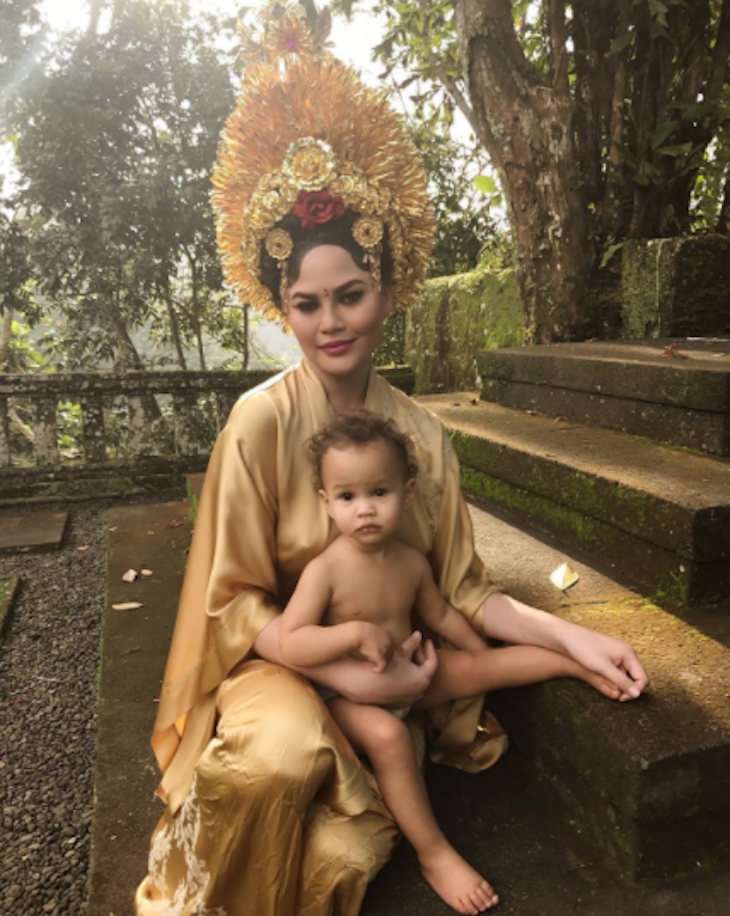 Chrissy Teigen proves that you can travel with your child at just about any age. The celebrity mom and model shared a new photo of her and her 15-month-old daughter Luna enjoying their vacation in Bali, Indonesia with husband and father John Legend.

Dressed in the local culture’s traditional costume, Chrissy can be seen holding little Luna in her arms. She captioned the mother-and-daughter moment with, “We had the most beautiful, wonderful time in Bali. Como Shambhala, my body and mind have never felt so clear. Thank you for getting me to move again (first time since I was 8 months pregnant and Luna is ummmm 15 months old) and giving me some much-needed body and nutrition schooling! And thank you for dressing us in your beautiful, traditional ceremonial costumes! And don’t worry, everyone. I still love me some .99 two tacos. Balance! #notbeingpaidtosaythis.”

Chrissy has made it no secret that she loves her new role as a mother. She’s also hinted that she and her husband John are thinking about expanding their family, too. She told Marie Claire Magazine that she would love to have more children, but just isn’t sure about getting pregnant again. That’s because she’s worried about possibly having post-partum depression again.

She told the publication, “I would definitely adopt or have foster children. But I loved being pregnant. Maybe I should be scared [of having PPD again], but I don’t know. It couldn’t be any worse than it was–could it?”

In the same interview, Chrissy also said that she’s all too aware of how honest she can sometimes be both in life and on social media. The outspoken star is known for speaking her mind on Twitter.

She said, “I’m the person who had the fake ID in high school and college, and I would show it and be like, ‘I’m sorry; it’s fake,’ and run off. I don’t know if it’s way too honest or way too anxious–maybe it’s a combo of both.”

The Joys of Twins – It Is Truly AMAZING!