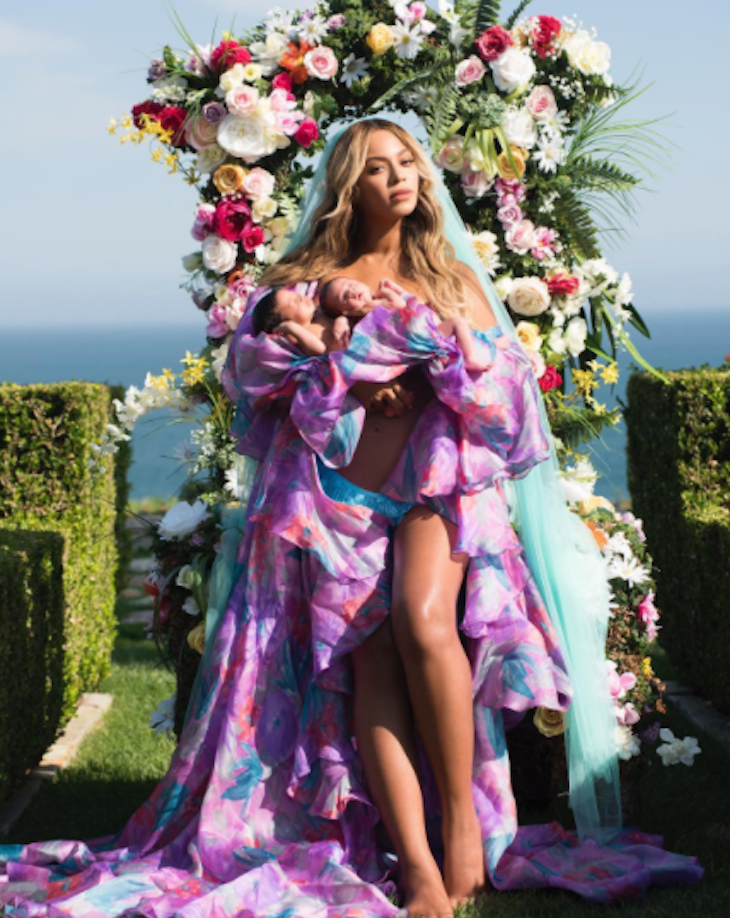 The wait is over! Chart topper Beyonce has finally introduced her newborn twins to the world. The chart topper shared a new photo on her Instagram account of her holding her son and daughter, Sir and Rumi, in a photo that has already gone viral.

Draped in a purple and blue veil, Beyonce is holding her twins in front of a floral backdrop, similar to what she used when she announced her pregnancy several months ago. She captioned her photo simply with, “Sir Carter and Rumi 1 month today.”

Beyonce and her husband, Jay-Z already have one daughter, 5-year-old Blue Ivy. Even though several media outlets indicated that Beyonce had given birth a month ago, the celebrity mom has never confirmed the reports until now.

Back in 2013, Beyonce opened up about becoming a mom and how she’s managed to juggle motherhood with her successful career.

She told the publication, “I felt very maternal around eight months. And I thought I couldn’t become any more [maternal] until I saw the baby. …But it happened during my labor because I had a very strong connection with my child.”

Beyonce also says that she has a better appreciation for her body then she’s ever had before. That’s because she believes her pregnancy and labor with Blue Ivy positively influenced the way she sees and even appreciates her body.

She explained, “I just feel my body means something completely different. I feel a lot more confident about it. Even being heavier, thinner, whatever. I feel a lot more like a woman. More feminine, more sensual. And no shame. I feel more beautiful than I’ve ever felt because I’ve given birth. I have never felt so connected, never felt like I had such a purpose on this earth.”

Keep up with CBL for all the latest on Beyonce right here.

Milla Jovovich Takes Her Daughters Ever and Dashiel To Paris