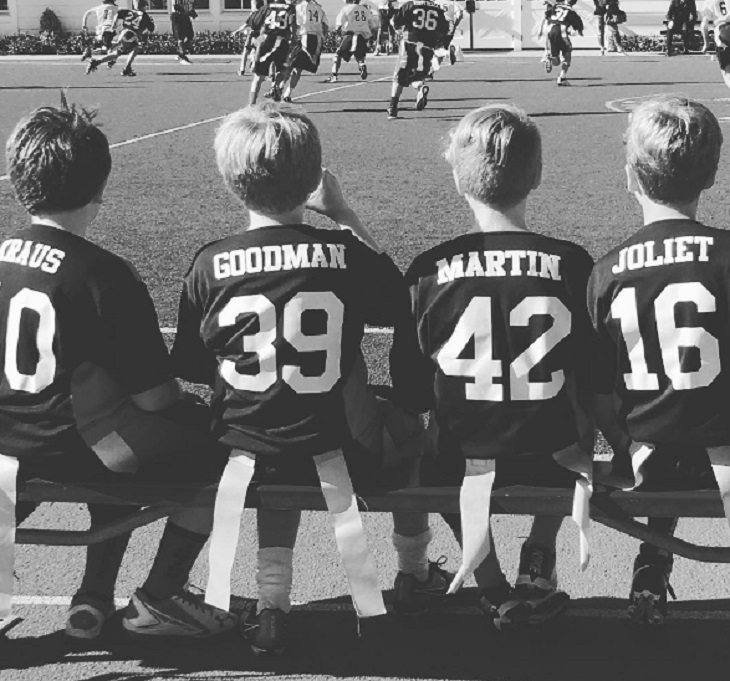 Proud mom Gwyneth Paltrow attended her son Moses Martin’s football game this week, and shared an adorable snapshot of him sitting on the bench with his teammates.  In the photo, Moses and his pals watch the game, with their flags pinned on their shirts, and eager to get in on the action.  It looks like Gwyneth Paltrow and Chris Martin could have a future athlete on their hands.

Gwyneth Paltrow and Coldplay musician Chris Martin welcomed Moses Bruce Anthony Martin in to the world in 2006, he is two years younger than their daughter Apple Martin.  Moses’ parents Chris and Gwyn “consciously uncoupled” in 2014, and the judge finalized their divorce this year.  Regardless of his parents’ relationship status, little Moses seems to be adjusting just fine, and is living a remarkably normal life for a 10 year old boy when you take in to consideration his family’s fame and the fact that they are constantly gracing the covers of tabloids.

#nomakeup for my 44th birthday, embracing my past and future. Thank you for the instalove #goopgoesmakeupfree @goop

Last month Moses and Apple’s mom celebrated her 44th birthday, and she nearly broke the internet by sharing a make-up free selfie on Instagram to commemorate her big day.  Here’s to hoping when we turn 44 years old and have a few kids under our belt, we look that good!

Of course, when Gwyneth Paltrow isn’t cheering on her son Moses at his football games – she devotes most of her time to her lifestyle website “GOOP,” which has received mixed reviews over the years.   Regardless of some opinions of the site, it must be raking in some success, because Paltrow has been in business now since 2008.