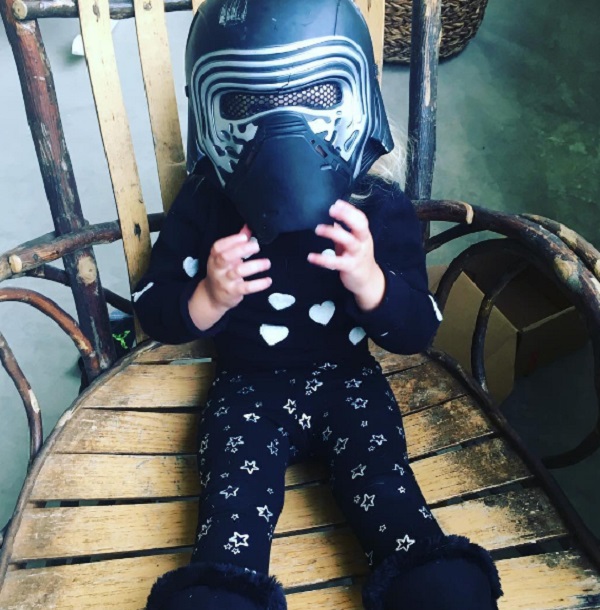 Steve Burton has a pretty big fan following on social media, due to his iconic General Hospital character Jason Morgan.  Now, the talented daytime soap star plays the part of Dylan McAvoy on CBS’s The Young and the Restless.  But, Steve Burton’s adorable daughter Brooklyn is certainly giving her proud dad a run for his money, and has quite a few fans herself – thanks to the adorable snapshots Steve keeps posting on social media.

Steve Burton and his wife Sheree have three adorable kids.  Their oldest daughter Makena was born in 2004, her little brother Jack came along in 2006.  Then on July 7 2014, Steve and Sheree announced the birth of their youngest – adorable Brooklyn Faith Burton.

The Young And The Restless actor recently uploaded a photo on Instagram of his cute toddler Brooklyn Faith, and she is rocking a Star Wars mask.  Burton jokingly captioned the photo, “Brooklyn. Now a Star Wars fan?”

General Hospital fans were pretty upset a few years ago when Steve Burton left the role of Jason Morgan on the ABC soap opera because he wanted to spend more time with his family.  Then, TPTB at The Young and the Restless recruited the star, and he agreed with the understanding that he would have a flexible schedule and would get to spend more time with his kids.  And, it looks like the actor has been doing just that!  Not only is Steve constantly uploading photos of his baby girl Brooklyn, judging from his social media accounts he also spends a ton of time with her big brother and sister, Jack and Makena.