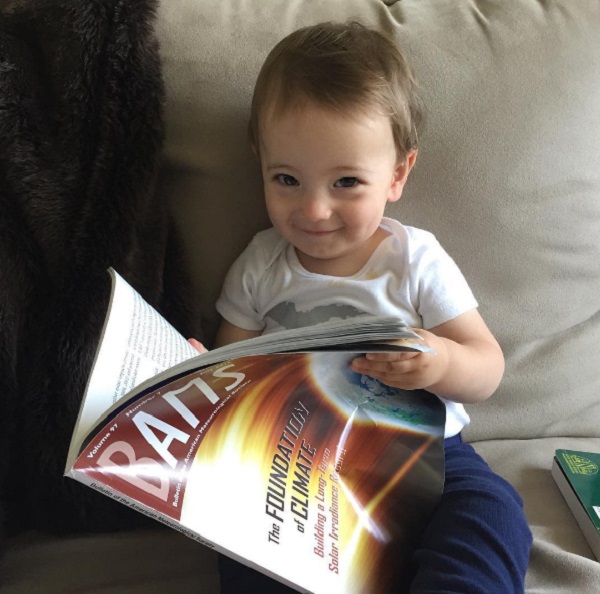 Good Morning America host and former Dancing With The Stars contestant Ginger Zee took to social media this week to reveal that her adorable baby boy, Adrian Benjamin Colonomos, appears to be following in his mother’s footsteps and is an aspiring meteorologist.

Ginger Zee posted an adorable photo of Adrian posing on the couch reading one of her meteorology books, Zee does the weather for ABC News and Good Morning America.  Her happy baby boy was all smiles as he read about “The Foundation of Climate.”  Ginger jokingly captioned the photo, “Got home and look what this guy was reading…my BAMS (Bulletin of the American Meteorological Society)#ams #meteorologyjournal #nerdalert.”

Ginger Zee announced in early 2015 that she and her husband Ben Aaron were expecting their first child together.  Ginger’s pregnancy was well documented on Good Morning America, and they even threw her a baby shower and a going away party right before she left for maternity leave, while they were on air.  Ginger also posted weekly blogs about her journey through pregnancy and kept her fans updated on everything, and we mean EVERYTHING.

After Adrian was born in December 2015, Ginger competed on ABC’s popular series Dancing With The Stars and cha-cha danced the baby weight off with ease.  She also made it pretty far in the competition with her partner Val Chmerkovskiy.

In just a few months Adrian Benjamin will be turning 1 year old, and it has been amazing getting to watch him grow over the past year on social media, and hear his proud momma tell us stories about her future meteorologist on GMA.