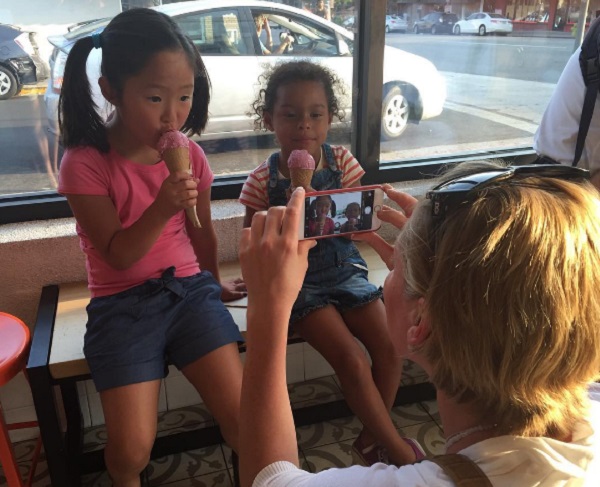 Josh Kelley and his pregnant wife Katherine Heigl took their daughters out for ice-cream, and Josh shared a sweet snapshot from their family outing on Instagram.  Naleigh and Adalaide were all smiles as they posed with their ice-cream cones, Josh managed to snap a photo of Katherine Heigl snapping a photo.  The singer captioned the picture, “@jenisicecreams in LA crushing flavor town !!! Happy#labourday people.”  So cute!

Katherine Heigl and Josh Kelley were married in 2007, after being engaged for about a year and a half.  In 2009, Heigl and Kelley announced that they had adopted a baby girl named Naleigh from South Korea.  [Naleigh is actually short for Nancy Leigh, after Katherine’s Mom.]  Then, Josh and Katherine added another new addition in 2012, they adopted a second little girl and named her Adalaide Marie Hope Kelley.

Earlier this year, Katherine Heigl made the shocking announcement that she was pregnant with her first child, and Katherine and Josh were just as shocked as we all were by the news.  Since the unexpected pregnancy, Katherine seems to be doing amazing and her baby is due in January 2017.

Heigl opened up in the recent edition of In Touch Magazine about her pregnancy and dished, “I’m just tired and hungry.  I’m hungry for doughnuts every day. And if you put a cinnamon roll in front of me, it’s going to get ugly.”  The pregnant actress also added that her hubby Josh is relieved that they are having a baby boy, and after their son is born he won’t be outnumbered by all of the girls in the house.