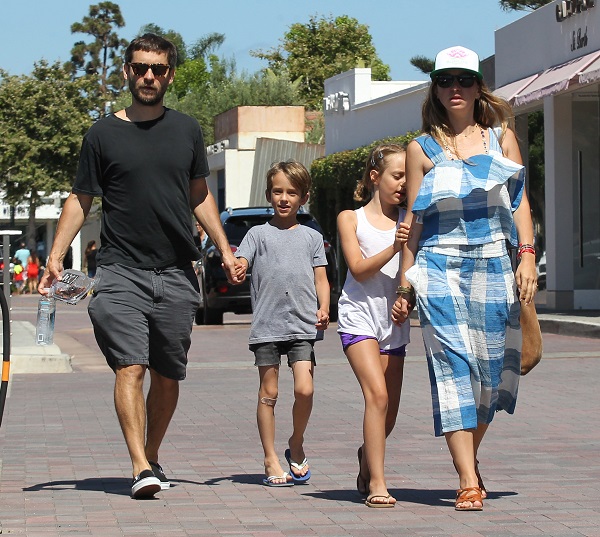 Tobey Maguire just turned 41 years old in June 2016, the father of two and actor is most well-known for his portrayals of Peter Parker in the Spiderman movies.  But since the last Spiderman movie he has also appeared in some hits like The Great Gatsby, Brothers, and even a cameo in the bizarre movie Tropic Thunder.  These days Tobey Maguire seems to be playing full-time dad to his adorable kids Ruby and Otis.  They were all smiles in Malibu over the weekend as Otis trotted along with his parents, holding his dad’s hand.

Tobey Maguire met his wife Jennifer Meyer, who was a jewelry designer at the time, back in 2003 when he was working on the horse-jockeying movie Seabiscuit.  Maguire and Meyer announced their engagement in 2006 and were married in 2007.  The couple have two children together, Otis Tobias Maguire (7 years old) and Ruby Sweetheart Maguire (9 years old).

According to the International Movie Database,  Tobey Maguire has not worked on any projects since his portrayal of Bobby Fisher in the 2014 movie Pawn Sacrifice.  Tobey has been playing Dad to Ruby and Otis 24/7, and the kids couldn’t look any happier.  It’s obvious they are thrilled to be spending so much time with their dad while he is on his Hollywood hiatus.