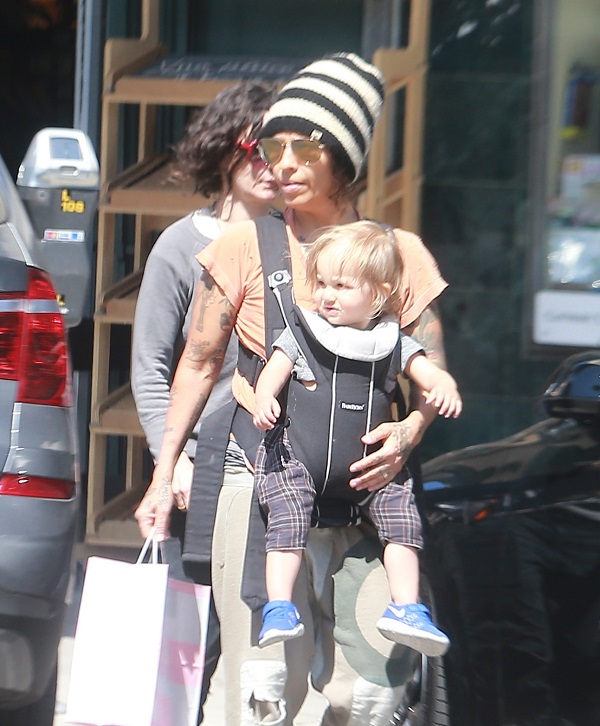 ‘The Talk’ host Sara Gilbert was spotted on Tuesday July 5 with her wife Linda Perry and their adorable baby boy Rhodes.  Gilbert and Perry did some shopping in Larchmont Village in Los Angeles, California.  The busy moms both left the store with their arms loaded with shopping bags, and Linda had Rhodes strapped to her chest in a baby carrier.

Rhodes Emilio Gilbert Perry just turned a year old in March 2016, and he is absolutely adorable!  The happy toddler’s moms were married in March 2014, and in September Sara Gilbert announced live on ‘The Talk’ that she and her wife Linda had a baby on the way.  Rhodes is actually Sara’s third child, she has a 7 year old daughter named Sawyer and a 10 year old son named Levi from a previous relationship.

Now that Rhodes is getting older, he has been making a ton of public appearances with Sara Gilbert and Linda Perry.  Just last month, Sara Gilbert was photographed out and about with her little boy and we were thrilled to see him toddling around and walking on his own.  Time really does fly!  Of course, his proud mama also raves about him on ‘The Talk,’ so we do get updates on him regularly during the CBS daytime show.

Sara’s wife Linda is clearly loving having a toddler to tote around as well, and is making mommy life appear to be a breeze.  Perry, who is also a musician, released an album of children’s music titled ‘Deer Sounds,’ which she credit her family for inspiration.