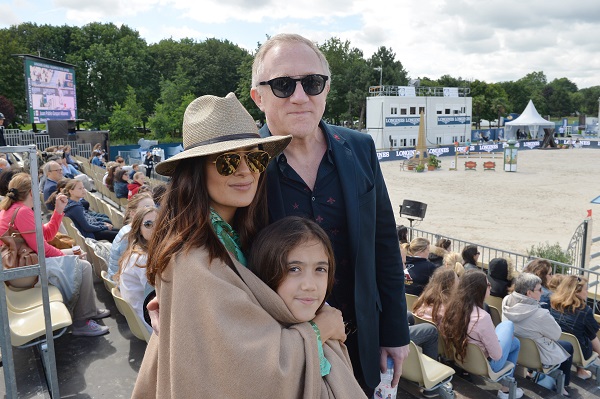 49 year old Salma Hayek seriously does not age, and her gorgeous 9 year old daughter Valentina has inherited her mother’s beauty.  Salma Hayek and her family were spotted over the holiday weekend in Paris, France – her husband’s home country – enjoying the traditional Paris Eiffel Jump.

The Longines Paris Eiffel Jumping features world class horses that come to compete.  According to the event’s official website, “During three days of competition, the public is invited to this green and convivial venue, Bagatelle, only a few minutes far from the Eiffel Tower. Edition on the theme of sport, Olympic Games and celebration, a “Village” will be designed for the occasion.”

Salma recently spoke out about her family in an interview in June while promoting her new movie ‘Tale of Tales.’  Hayek dished on her relationship with her husband and proclaimed he is her “angel and saint” and explained the she is forever grateful for his undying devotion to her and their daughter Valentina.

So, what do you think of Salma’s beautiful family photos?  Can you believe how much Valentina looks like her mother?  Share your thoughts in the comments below and let us know what you think!