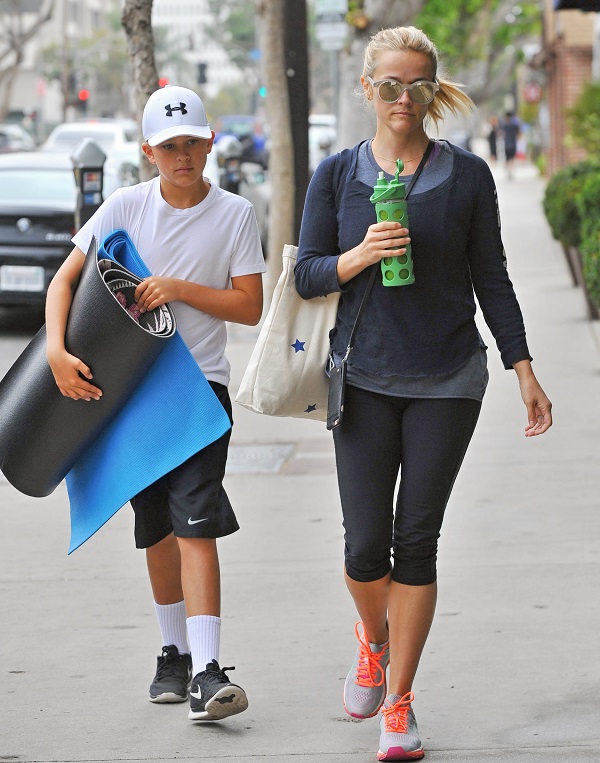 This might be one of the cutest mother and son activities we have seen in a while.  Actress Reese Witherspoon had a hot date to Yoga on Thursday July 14, with her son Deacon Phillippe.  Reese and Deacon were spotted heading in to a Yoga studio in Los Angeles, California, and the mother and son were all smiles as Reese carried her tote and Deacon followed behind her with Yoga mats for both of them.

Deacon Phillippe, Reese’s son from her previous marriage with actor Ryan Phillippe, is growing up so fast!  The handsome almost teenager will turn 13 years old in October 2016, and he truly is a spitting image of his father.  Ironically, Ryan and Reese’s 16 year old daughter Ava could pass as Reese’s twin.  It’s adorable that Deacon has no qualms about heading to Yoga with his mother, and even carried her mat for her. Reese and her kids are always keeping active together, they are constantly being spotted at parks or on nature hikes.

Reese Witherspoon might be a 40 year old Mom now, but all of that Yoga and hiking has certainly paid off, the actress looks amazing!  This week Reese actually made headlines when she proved that she still “has got it” and slipped in to the iconic bikini that her character Elle wore on the hit movie “Legally Blonde.”  If we knew Yoga helped you fit in to a bikini you wore over a decade ago, we would go more often!