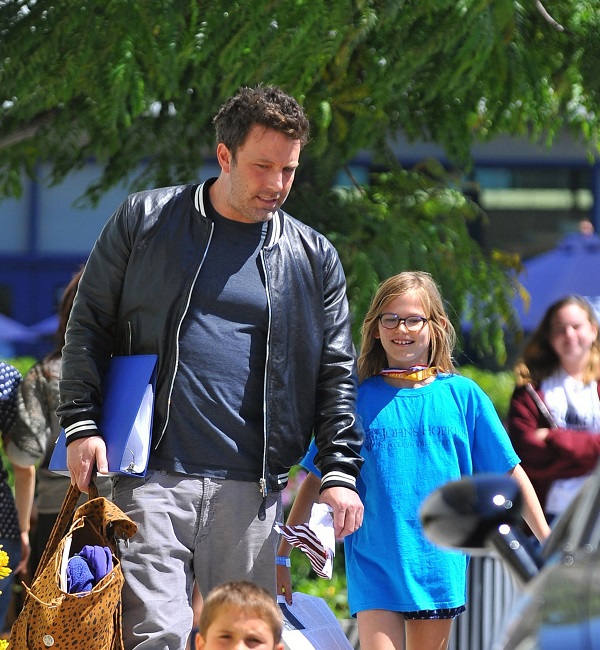 Ben Affleck recently returned to Los Angeles after filming his newest movie in Europe, and he appears to be catching up on lost time with this kids.  The actor and dad was spotted picking up his daughter Violet Affleck on Friday July 15.  He carried his little one’s backpack for her as she trotted closely behind him, they hopped in Ben’s car and rode off.

Ben Affleck and Jennifer Garner’s marriage and split has been in the tabloids and media for much of 2016, despite all of the drama surrounding their announcement to divorce, plus a rumored reconciliation, Ben Affleck and Jennifer Garner seem to be putting their children first and co-parenting like pros.  The couple has been rather private, it’s unclear whether or not they are still moving forward with their divorce, but one thing is for sure – they are both there for their children during this confusing time.

Violet Affleck was all smiles as she left with her dad.  Violet turned 10 years old in December 2015 and is the oldest of Jen and Ben’s three children.  Violet is big sister to Seraphina (7 years old) and Samuel (4 years old).

Earlier this month, Ben Affleck and Jennifer Garner celebrated Independence Day with their three kids.  The family sat together in lawn chairs and enjoyed the 68th Annual Fourth of July Parade in Pacific Palisades, California.  Samuel, Seraphina, and Violet Affleck were all dressed for the occasion, proudly rocking red, white, and blue outfits for Independence Day.