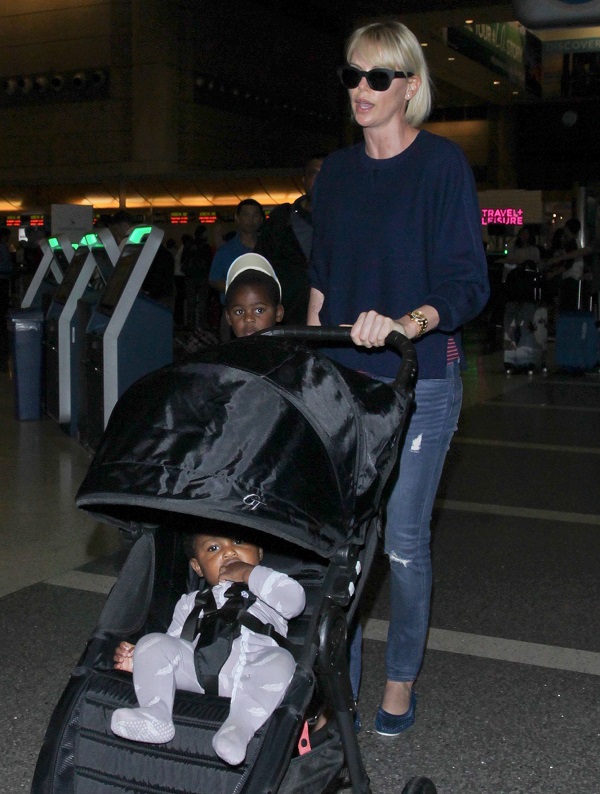 Talk about a working mom!  Actress Charlize Theron is very busy these days promoting her new animated film, “Kubo.”  But, she doesn’t let that get in the way of her parenting duties.  The busy mom just packs up her kids Jackson and August and takes them with her.

Charlize Theron was spotted at LAX Airport in Los Angeles, California on Thursday July 14.  Charlize had her kids Jackson and August in tow.  In March 2012 Charlize adopted her son Jackson, and her daughter August joined their happy little family a year ago in July 2015.  The busy mom pushed August along in her stroller, and big brother Jackson followed closely behind while they made their way through the airport.

This Spring Charlize Theron opened up about being a single mom to Jackson and August and juggling her busy work schedule in an interview with Sunday Style.  Theron explained, “It’s challenging but we manage.  I work, but my children are my priority. Nothing’s better than the sound of little ones cracking up at something funny; I’m now at my most comfortable waking up with my kids, going to the beach and relaxing over a meal with friends …”

Charlize Theron seems to be a pro at juggling her film career and her children.  It’s certainly admirable that a single mom of two children under the age of 5 years old is still churning out hit movies!  Charlize’s new film “Kubo And The Two Strings” (or “Kubo” for short) is set to premiere in theaters on August 19 2016.