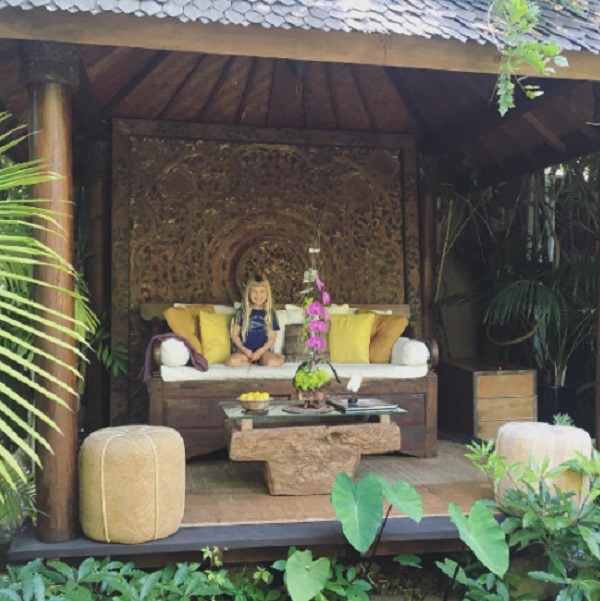 We are a little jealous!  Singer Pink took to Instagram this weekend to share a photo of her beautiful 5 year old daughter in their “Sacred Space.”  Seriously, we need a space like that!  In the photo, Willow appears to be seated outside on a couch on a patio surrounded by bamboo and other beautiful plants.  She looks so happy and at peace!

Pink, aka Alecia Moore, and her husband Carey Hart welcomed their baby girl Willow Sage in to the world back in 2011.  Now, Willow is a healthy and pretty hilarious 5 year old with a ton of personality.  The singer and mom is constantly keeping fans updated on social media with photos of her family and the beautiful little Willow.

In May 2016 Pink made an appearance on Good Morning America, and of course talk turned to her daughter Willow.  The singer and Grammy winner revealed that her daughter Willow actually thinks she is a bad singer.  How ironic!  Pink explained that Willow finds her singing “really distracting,” and even said to her mom once, “Shh mama terrible voice.”  Well, we beg to differ Willow!

Pink also explained during her interview that Willow is her best critic, and she bounces song ideas off her 5 year old all the time.  Pink joked that if her 5 year old starts running around and singing the song after just one listen, then she knows it has hit potential.

Maybe Pink tests her songs on Willow in their “Sacred Place.”  Do you have a sacred place where you and your kids like to get away to?  Let us know in the comments below!