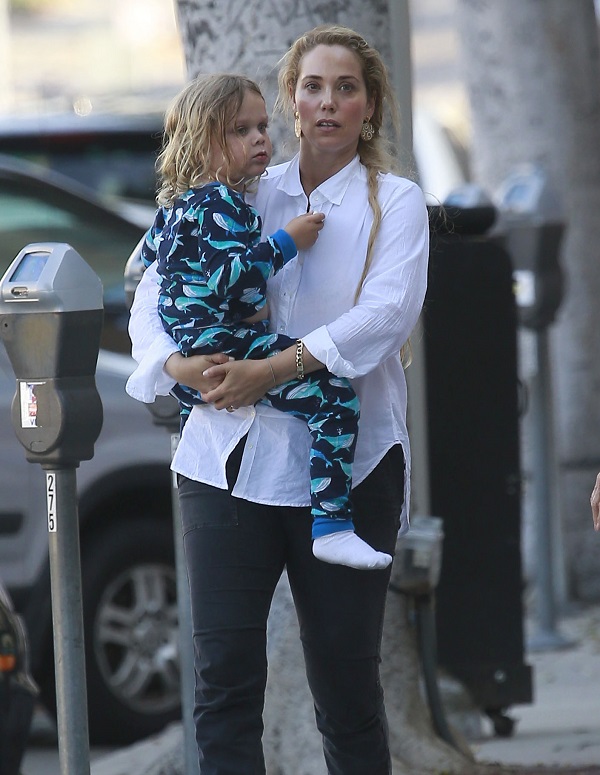 Actress Elizabeth Berkley was spotted out and about with her handsome boy Sky Lauren in Los Angeles on Saturday June 25.  Elizabeth was dressed pretty casually in a white shirt and jeans, but not as casually as Sky!  The sleepy faced toddler appeared to be wearing pajamas, and his mom toted him down the street because he wasn’t wearing any shoes.

Sky is growing up so fast!  It seems like just yesterday that Elizabeth Berkley and Greg Lauren announced the birth of their baby boy.  On July 12 2016 Sky Cole Lauren will be turning 4 years old.  So, in Sky’s defense, we’re pretty sure there is a rule about not having to get dressed or wear shoes on a daily basis until you are at least 5 years old.

Elizabeth Berkley has been pretty low key since the birth of Sky, playing mom to the adorable tot is clearly her main priority right now.  The former ‘Saved By the Bell’ actress is spotted out more with Sky than she is with other celebs or at Hollywood functions.  Everytime Elizabeth is photographed out and about, she seems to be toting Sky on her hip.

Sine her 2013 appearance Dancing With The Stars, Elizabeth has remained mostly out of the spotlight, and she doesn’t seem to be in a rush to get back to work.  However, in 2016 she did score a minor guest role on FOX’s hilarious sitcom ‘New Girl.’  It’s unclear whether or not Elizabeth plans to get back to work once Sky is a little older, but right now the ‘Saved By The Bell’ alum is clearly just enjoying being a mommy and spending quality time with her little one.