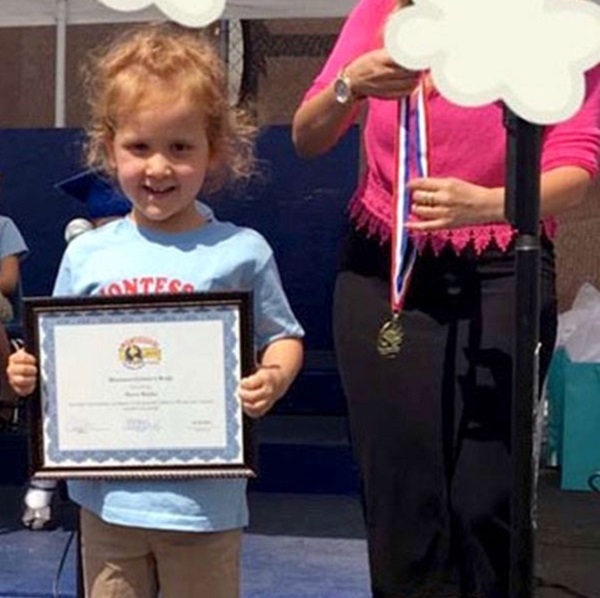 Congratulations are in order for Jessica Alba and Cash Warren’s youngest daughter Haven!  Over the weekend actress Jessica Alba took to social media to announce that Haven had graduated from Pre-School, and she shared some adorable photos of red-headed 4 year old, so cute!

Jessica Alba took to SnapChat to post some photos of Haven’s graduation ceremony, the beaming little one wore her official school uniform for the event, a blue Montessori T-Shirt and khaki shorts.  Haven’s proud mom shared photos and videos of her daughter accepting her certificate on stage and stating the Pledge of Allegiance.  Could she get ANY cuter?  Alba also shared a photo of one of her daughter’s teachers and revealed that she was “Havie’s Fave.”

It has been a busy summer so far for Cash Warren, Jessica Alba, little Haven and her big sister Honor Marie.  Last month Jessica and Cash celebrated their wedding anniversary, and Honor’s birthday.  Now, their youngest daughter just graduated from pre-school!

Somehow the famous family still manages to find time to attend some of the hottest Hollywood events amidst all of their family activities.  After Haven’s graduation ceremony, Jessica and Cash attended the premiere party of the hilarious new movie “Seoul Searching,” which Jessica also documented on social media.  The mom of two looked amazing in the photos she shared from the 80’s Prom themed party!

Seriously though, how cute was little Haven Warren at her graduation?  Can you believe how fast Jessica Alba’s little girls are growing up?  Let us know what you think in the comments below!