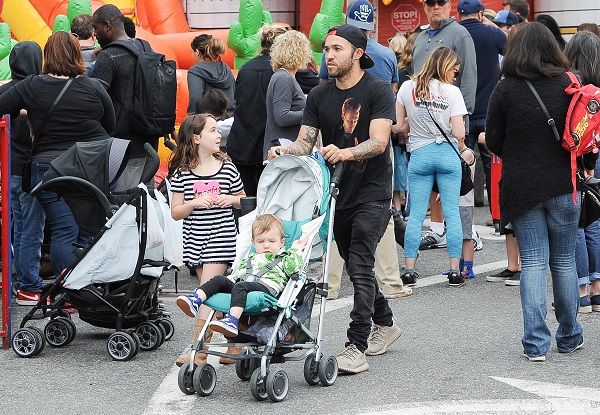 Pete Wentz made his trip to the farmer’s market this weekend a family affair!  The ‘Fall Out Boy’ singer and musician was spotted at the Los Angeles farmer’s market in California on Sunday, May 29 with his two sons Bronx and Saint, and his girlfriend Meagan Camper.

Pete, Megan, and their blended family were all smiles this weekend while they did a little shopping at their local farmer’s market.  Pete and Meagan announced in February 2014 that they were having their first child together, Saint Laszlo Wentz was born on August 20, 2014, and he is growing SO fast, the smiling toddler will be two years old this summer.

Pete and Meagan, of course, had Pete’s older son Bronx Mowgli Wentz in tow, the 7-year-old is the son of Pete’s former wife Ashlee Simpson.  After three years of marriage Ashlee and Pete called it quits, Simpson now has another child with her new husband Evan Ross.

Pete Wentz recently opened up about blended parenting, and how he and his family make it work.  The ‘Fall Out Boy’  and his girlfriend Meagan, and former wife Ashlee Simpson seem to be the perfect model of co-parenting these days.  With blended families rising in popularity, it’s important to do what is best for the children and be civilized with your exes – Pete Wentz seems to have mastered that.