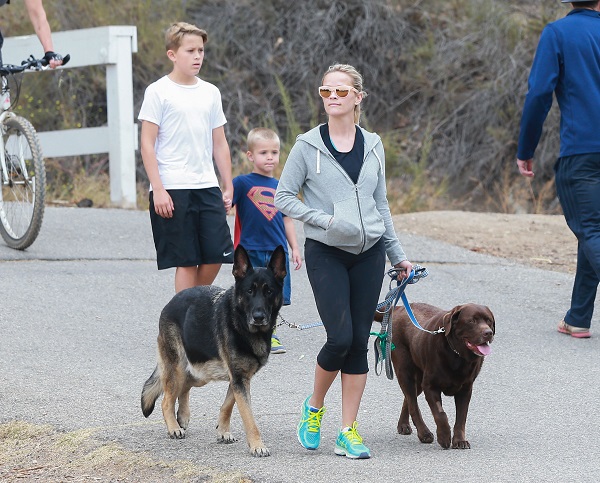 Reese Witherspoon spent some quality time with her two sons over the weekend.  The actress was spotted out and about on Saturday, May 28 in Pacific Palisades, she and her sons Deacon Phillippe and Tennessee Toth enjoyed a hike together with their family’s dogs.  It looks like they had a blast!

Reese bonded with her two boys on their outing, apparently it was a mommy and sons day – Reese’s husband Jim Toth and daughter Ava sat this one out.  3-year-old Tennessee James Toth was adorable in a Superman cape as he navigated the nature trail with his mom and big brother, 12-year-old Deacon Reese Phillippe.  Reese kept her boys close as she walked their two dogs.

Recently the busy actress has been working hard expanding her fashion empire when she isn’t playing mom to Ava, Deacon, and Tennessee and wife to her husband of five years Jim Toth.  Reese’s first Draper James store was opened up in Nashville a year ago.  After achieving major success, Reese is expanding, and earlier this month she opened a pop-up store in Dallas, Texas.  Later this year the official Draper James Texas store should be complete.

It really is impressive how much Reese Witherspoon has been juggling these days and the fact that she still finds time to take her boys on a family hike.  On top of her acting career, clothing line, and mommy duties – Reese Witherspoon is an avid reader and hosts her own book club on social media.  She posts photos of every book she is reading on a regular basis and reviews for her followers.

Chris Martin Takes Apple Out To Dinner In Barcelona