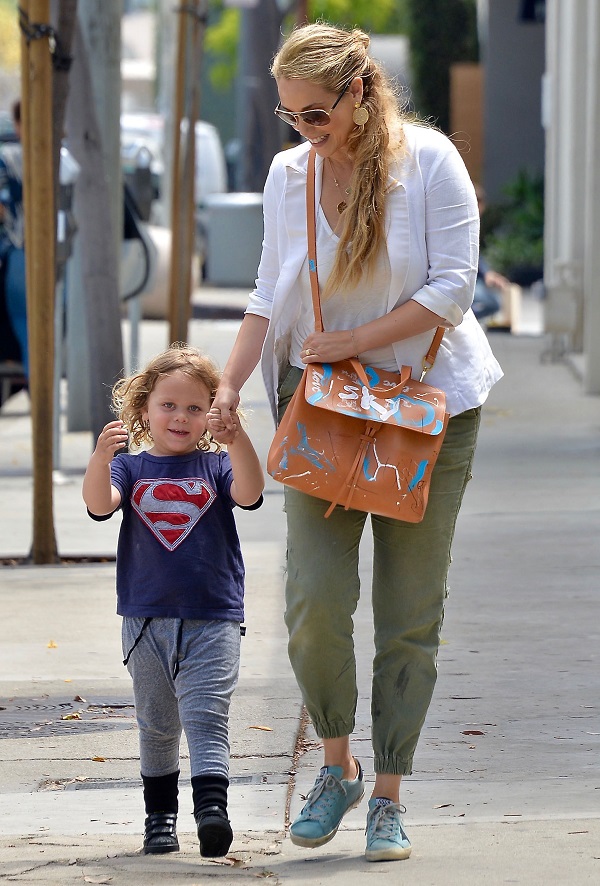 ‘Saved By The Bell’ alum Elizabeth Berkeley had a lunch date with her son Wednesday May 18.  Berkley and her adorable toddler Sky Lauren were spotted grabbing a yummy lunch at Au Fudge together in West Hollywood, California.  And, Sky’s mommy Elizabeth was rocking a super cute brown tote bag that he had decorated for her himself.

Anyone who grew up in the 1990’s will recall Elizabeth Berkley as the brainy and gorgeous Jesse on the hilarious teen sitcom ‘Saved By The Bell.‘  Berkley appeared in a slew of TV movies in the 2000’s and several other minor television roles.  She married her husband Greg Lauren in 2003, and the couple welcomed baby Sky Cole Lauren in July 2012.  After Sky was born, the ‘Saved By The Bell’ actress got back in to shape by performing on ABC’s Dancing With The Stars in 2013.

Last month Elizabeth appeared on an episode of Ellen DeGeneres’ popular daytime talk show and she had and on-air with reunion with her former ‘Saved By The Bell’ co-star Mario Lopez, who played the part of AC Slater.

It looks like Elizabeth has been enjoying some one on one time with little Sky these days, and he is absolutely adorable!  The tot bounced up and down as he walked hand in hand with his mom on the way to their lunch date.  We are loving his long blond hair, it is too cute when moms let their sons grow out their hair!