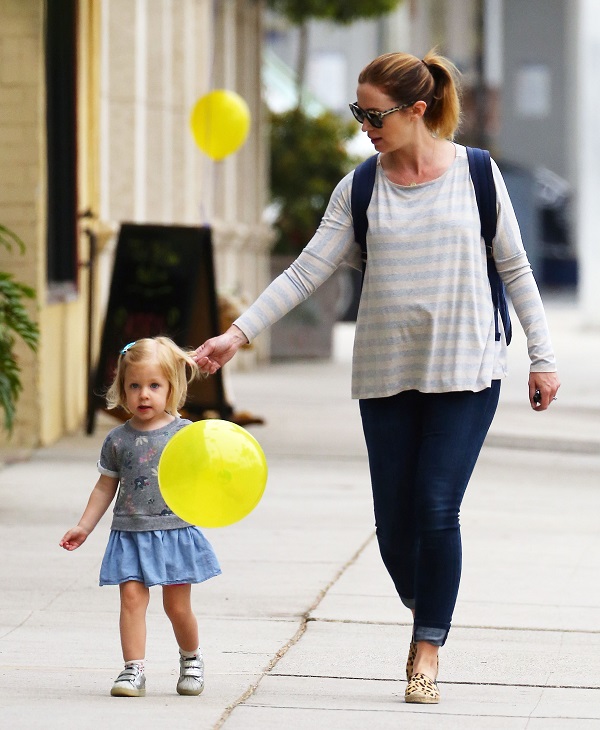 Actress Emily Blunt was in full-blown mommy mode on Thursday May 19. The pregnant ‘Huntsman‘ actress was spotted out and about with her adorable daughter Hazel in Studio City, California.  Emily and Hazel were just leaving The Yellow Ballon salon, where Hazel had gotten a hair cut.  The tiny toddler walked next to her mother, toting a yellow balloon on a string that she had received when she was done getting her hair cut.  Pregnant Emily was beaming, and appeared to be chatting with her little girl about her hair.

Emily Blunt married her husband, fellow actor John Krasinski in July 2010 in Italy.  The couple’s first child, the adorable Hazel was nearly a Valentine’s Day baby, Emily gave birth to her on February 16 2014.  The actress is now pregnant with baby number two, her rep confirmed that she was expecting her second child in January 2016 – there is no news on her exact due date, but judging from her adorable baby bump, it’s not too far away.

Last week, Emily Blunt made news when she reunited with her former ‘Devil Wears Prada‘ co-star Anne Hathaway in Los Angeles.  The actresses were frienemies on the classic movie, but apparently are pals in real life.  Emily and Anne attended an event to honor the highly fashionable costumes and wardrobe that were featured in Hathaway’s new movie ‘Alice Through The Looking Glass.’

It looks like Emily and little Hazel had an amazing afternoon together, and she is going to make a great big sister to  Emily and John’s new baby boy or girl!