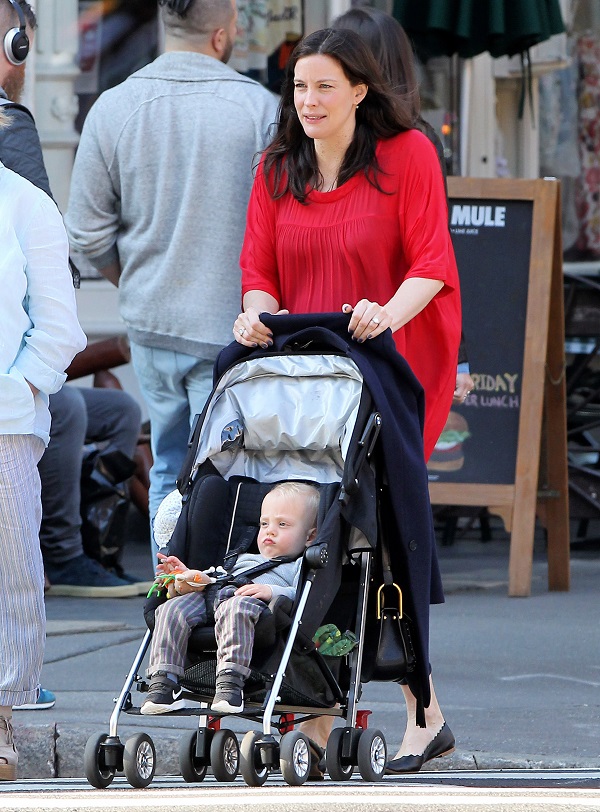 Liv Tyler isn’t letting her pregnancy and growing baby bump get in the way of enjoying quality time with her son Sailor.  Liv was spotted in New York City on Thursday May 19, the actress and daughter of rocker Steven Tyler, was pushing her son Sailor in his stroller and wearing a loose-fitting bright red maternity top, paired with some comfty leggings.  Sailor appeared to be taking in the sights of the busy NYC street in their West Village neighborhood.

This is the ‘Leftovers’ actress third pregnancy.  Liv has an 11 year old son named Milo from a previous relationship.  She and her fiance David Gardner (‘The Lord Of The Rings’) met in 2014 through a mutual friend and have 1 year old son Sailor Gene, and now baby number two on the way.

Liv announced in January 2016 that she was pregnant on social media.  She shared a photo of her baby bump and captioned it, “The stork is visiting us again !!!!  I am growing another Tyler Gardner in my belly. Our family is growing!!! So grateful @davegardner I love you.”  The actress is keeping the baby’s gender a secret, and her exact due date hasn’t been confirmed – although she definitely appears to be in her final trimester.

As for 15 month old Sailor, Liv revealed that the adorable toddler just started walking this month and she has kept her fans updated on Instagram.  We’re sure Sailor and Milo will make amazing big brothers to Liv and David’s new bundle of joy.  Congrats to the Tyler-Gardner Family!