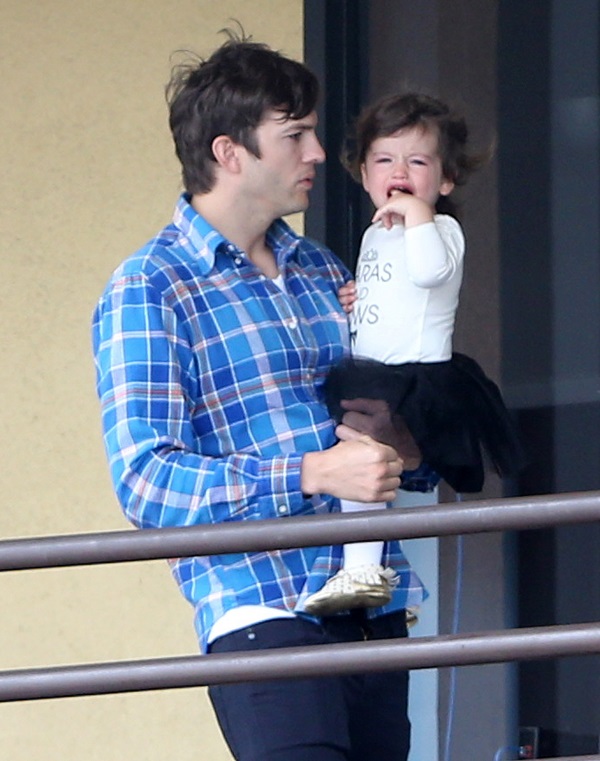 Wyatt Isabelle Kutcher is the only toddler we know that can make crying look so darn cute!  Ashton Kutcher and Mila Kunis were spotted taking their adorable baby girl to dance class on Friday May 20.  The adorable 1 year old was rocking a black tutu as her dad Ashton Kutcher carried her in to Creation Station in Studio City, California.

Ashton Kucher and Mila Kunis stopped in front of the doors to the dance studio and Ashton put Wyatt down on the ground and she toddled around.  We are going to assume that Wyatt Isabelle is Miss Independent – and she was upset because she wanted to walk on her own.  Regardless, whatever had the tot upset seemed to pass and the tiny family headed in to class.

Ashton Kutcher and Mila Kunis have been together since 2012, although the ‘That 70’s Show’ alums have played coy about their relationship and kept their private lives rather private, it’s reported that they married in July 2015 in a small and intimate wedding.  Mila gave birth to Wyatt Isabelle on October 1 2014, she’ll be turning two years old this fall.

This month Mila Kunis opened up in a rare interview with Entertainment Tonight about being a mother to baby Wyatt.  The actress dished, “I reprioritized my life, in all honesty. I traveled through all my twenties and I was very selfish … in a good way, not in a way I regret. And I think having a kid made me realize how incredibly selfless I want to be.”