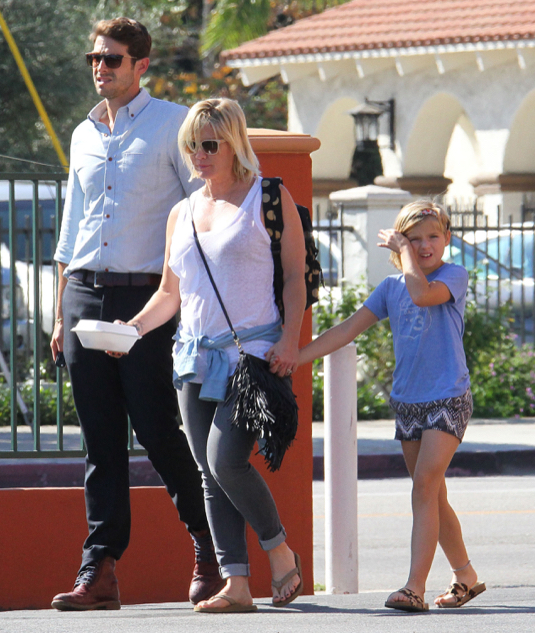 Jennie Garth and her husband Dave Abrams were spotted taking her daughter Fiona Facinelli out for lunch in Los Angeles, CA on Wednesday (Oct. 7).

The Mystery Girls actress was dressed casually in a white tank top, a blue sweater around her waist and ankle jeans. She carried left-overs in a box while holding her daughter’s hand.

“Everything that I had known before [was] replaced by my new life: working very extensive hours, managing having a house of my own and all that goes with that, dealing with money and all the complications of having it,” she told ABC News. “I was thrown into a grown-up world that I really wasn’t equipped to handle quite yet. On the other hand, I was ‘living the dream,’ so how could I complain? [But] people looked at me differently, even some family members. People treated me differently. It was a head trip for sure. I honestly just didn’t know what was happening, or have any idea of changing the course.”

In related news, Tori spelling (Garth’s 90210 co-star and good friend) said in a recent interview that during the filming of the show, Garth and Shannen Doherty actually went head to head and got into a physical fight.

Tips for Surviving the First 3 Months of Motherhood

Ashton Kutcher Gets a Special Visit on Set