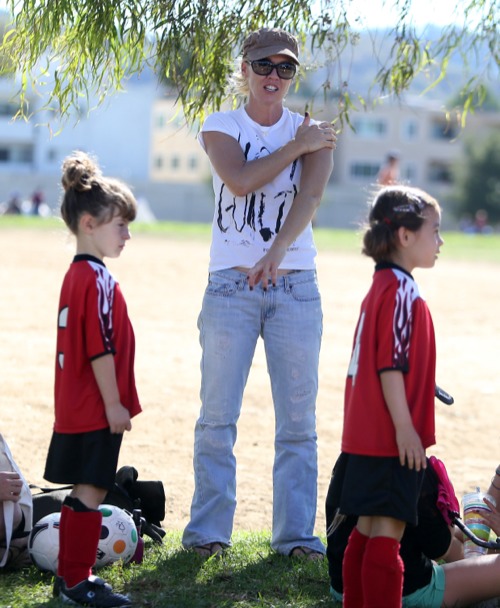 Jennie Garth showed her support for daughters Fiona and Lola Facinelli at their soccer game in Calabasas, CA on Saturday. The actress wore a  ‘Not Guilty’ shirt  with blue jeans while making sure her duaghter’s covered themselves properly with sunscreen. She then joined in a stretching routine with Lola.

The Jennie Garth: A Little Bit Country star who split from husband Peter Facinelli after eleven years of marriage was spotted out on a date with real estate expert Jason Clarke last Sunday night (21.10.12).

“She looked super cute. She loved the music and sat in the front row. It was just the two of them alone,” a source told US Weekly.

Apparently, this Garth’s third romance since splitting with Facineli last March. She was breifly linked to The Antonio Treatment star Antonio Ballatore and photographer Noah Abrams.

Earlier in month Garth admitted she felt depressed for several years before her marriage ended.

“I spent a couple of years lying in bed and being depressed. It was that ‘I can’t breathe’ pain. Physically I didn’t look my best and mentally I didn’t feel my best. I was doing everything I could to be a good mom but that was all I could handle,” she said.