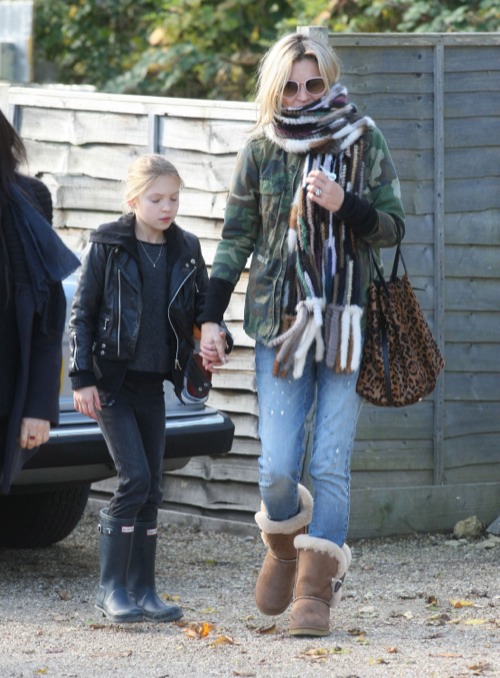 Kate Moss and her daughter Lila Grace were spotted out in the Cotswolds, England on Saturday. The model was dressed warmly in jeans, a cameo jacket jacket with a oversized scarf and winter boots. The 10-year-old was dressed just as warm in a black top and jeans paired with a leather jacket and Hunter boots.

In her new autobiography Kate: The Kate Moss Book, the British fashion opens up about how she dealt with the damaging accusations that she was a heroin user and anorexic back in the 90’s.

“If I was anorexic or if I was on heroin, maybe I would have been a bit more ‘oh dear!’,” the Daily Mail quoted her as writing.

“But I wasn’t any of those things that they were painting me to be,” she wrote.

Moss has never commented on the accusation before now.

“It didn’t have anything to do with who I was at all, so I never really thought about it. I just thought, the people who know me know the truth,” she said.

Moss credits her then boyfriend Johnny Depp, who told her to “never complain” and “never explain.” as the reason for keeping mum.