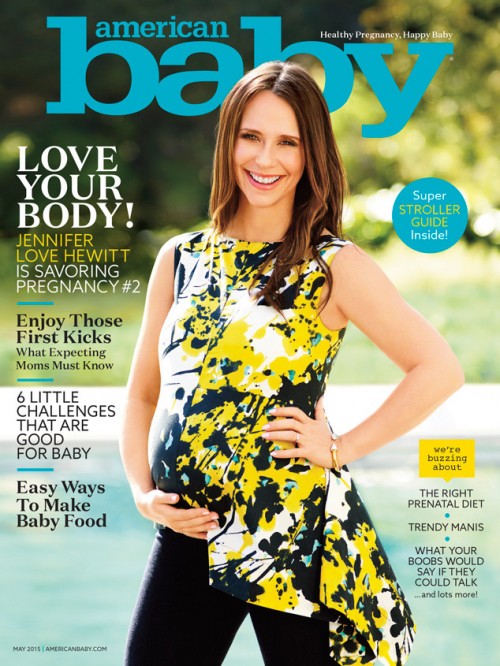 Jennifer Love Hewitt glows while covering the May issue of American Baby.

The Criminal Minds actress opens up about her second pregnancy with husband Brian Hallisay, and their 16-month-old daughter Autumn.

“Pregnancy is magical. I’m grateful. It’s not lost on me what a gift it is to be able to get pregnant,” she said of her second pregnancy.

Hewitt has taken a different approach to her eating habits this pregnancy.

“I’ve been an actress for 25 years, and have had to be hungry at times for my career, so being pregnant is completely freeing. When I was expecting Autumn, I ate everything I saw! I told myself, ‘Oh there’s a donut—I should have that.’ Now with this second pregnancy, I know the baby really doesn’t ‘need it.’ So I eat healthy foods in general, but I also indulge in little things that I crave,” she told.

The actress also reveals she hasn’t had any crazy pregnancy cravings.

“Nothing too weird, although pickles for me this time have actually been a thing. .. I sort of just like the things that I normally like, but more of it. I’m a big jalapeno person when I’m pregnant, which I like anyway. Italian food, which I kind of like anyway. You know cake, hotdogs, you name it really. Pretty much anything,” explained the actress.

Hewitt has two pieces of advice for other pregnant mommies – Embrace you curves and take time for yourself.  She told:

“Your body changes so much, and there’s a sensuality about that. I say accentuate the fact that your legs look thinner than they ever have, and your boobs look great: Work it!”

“Because so many of us are busy or driven, we forget to take care of ourselves. But when you’re pregnant, it’s all about you—and that baby inside of you. Enjoy a nap; for some reason our generation thinks we can’t do that! Really listen to your body. I hope to continue to be a little kinder to myself after pregnancy.”

Hewitt and Hallisay married in 2013.