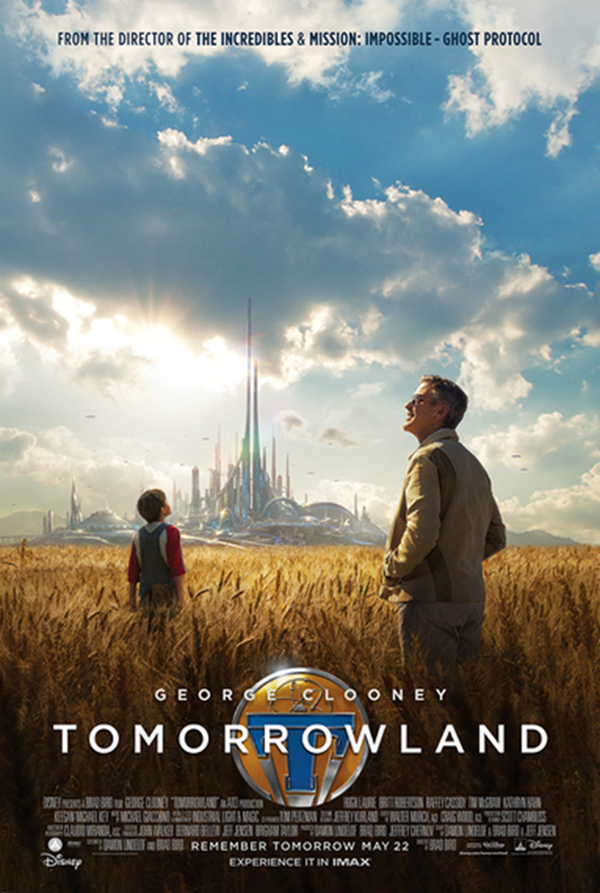 Tomorrowland is a new family-friendly movie brought to the big screen by Disney. Anchored by a glitzy and talented team, the film is a riveting, mystery adventure. Academy Award winner George Clooney stars as former boy-genius, Frank. After years of being jaded by disillusionment, Frank’s world is turned upside down by a bright, optimistic teen bursting with scientific curiosity named Casey and played by Britt Robertson.

The Disney film nods to Tomorrowland in Walt Disney World‘s Magic Kingdom. However, the exploration of the new world is a fresher look at the area. Frank and Casey are thrust into a danger-filled mission to unearth the secrets of an enigmatic place somewhere in time and space known only as Tomorrowland.

Their story begins with a pin that is far more than it seems, but the story behind the concept of the film  starts with Walt Disney. The magic of Disney World was actually fueled by Walt. He had such a passion for the future and being a part of making things better. Improving the world and how it works. In fact, Epcot was Walt’s passion and he created the area to be a “community of the future” versus a theme park.

Tomorrowland is a peek inside Walt Disney’s view of what the future held. Did you know that the area was designed to represent the year 1986? The land encompasses one of the classic favorite attractions, Space Mountain. However, the connection between the film and the park contains a movie spoiler, so we won’t ruin it with that detail, but it will make the adventure even more enjoyable.

Featuring a screenplay by Lost writer and co-creator Damon Lindelof and Brad Bird, from a story by Lindelof & Bird and Jeff Jensen, Tomorrowland promises to take audiences on a thrill ride of nonstop adventures through new dimensions that have only been dreamed of. The film also stars Hugh Laurie as brilliant scientist David Nix, Raffey Cassidy, Tim McGraw, Kathryn Hahn, Keegan-Michael Key and Thomas Robinson.

Disney fans of all caliber will enjoy the film. It will certainly change your view of the land in your next trip to the Magic Kingdom. Fans will also see just how important another ride, It’s a Small World, is. The irony won’t be lost either. You’ll have to wait until May 22, 2015 when the film opens nationwide to see what secrets Tomorrowland holds!

Do you have a favorite Disney film? What attraction would you love to see be featured in a Disney film? Let us know in the comment section below!