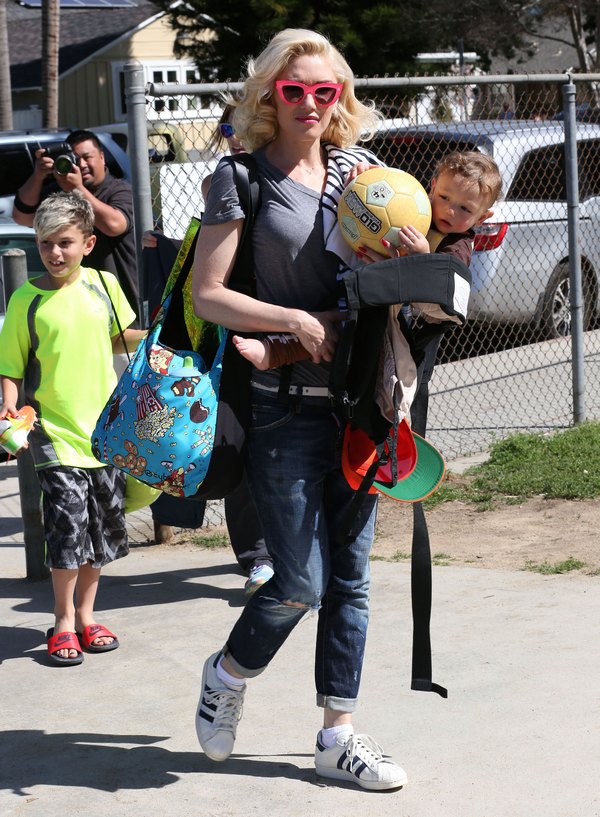 Gwen Stefani’s super soccer mom style mixes weekend comfort and sporty style with the right amount of her famous flair. The former judge for ‘The Voice‘ took her three boys to the park in the Studio City neighborhood of Los Angeles. There, 8-year-old Kingston and 6-year-old Zuma played in a soccer match, while Gwen and Apollo cheered them on.

She didn’t rock her signature red lipstick, but she did have bright candy apple red nails. Gwen also looked cute in her pink cat eye sunglasses. The rocker wore a grey T-shirt, ripped boyfriend cut skinny jeans, and white sneakers with blue stripes. Later, while sitting in the shade, she draped a long-sleeved, blue-and-white-striped top across her shoulders.

Dad, Gavin Rossdale, was absent from the match, but Gwen and Apolo cuddled on the sidelines. At one point, Gwen breastfed the tot, who then fell asleep. How sweet! She also hung out with Zuma, wiping a bit chocolate treat away from his mouth. The two laughed and joked during the game break.

Gwen has also been busy recording. The mother of three boys is finally cranking out another solo album. The still unnamed album will be the second after her 2006 release of The Sweet Escape in 2006.

Kingston’s game appeared to end well. He showed off a trophy to his proud mom later in the day. Maybe they have a future soccer star in the making!