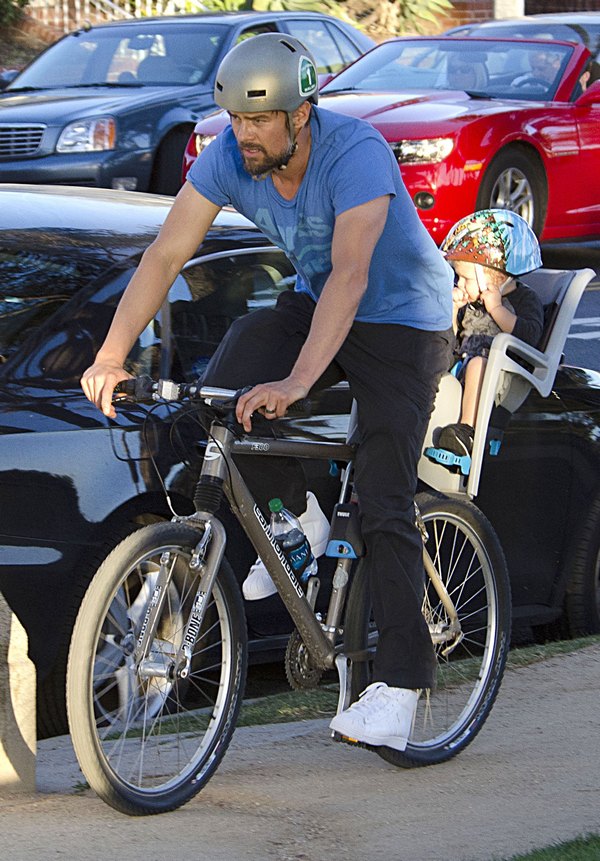 Josh Duhamel and his son Axl went on a bonding bike ride before Josh’s Reddit AMA interview. The father son duo peddled around Santa Monica, California with smiles. It was a safety first outing; Duhamel and Axl remembered their helmets and some extra water.

Later that sunny Friday, Josh participated in a Reddit AMA (Ask Me Anything) and shared some details of his lifestyle, including where he and his famous wife, Fergie, like to eat joking, “Yes, we do still go to Taco Bell! We’re very glamorous.“

Duhamel also spoke about what it is like to be famous stating, “I don’t really take fame that seriously, to be honest. I don’t feel it’s that real,” he shared. “There are some great benefits to it, but at the end of the day, I’m truly no different than I was when I got into this business.“

He further explained his balance of fame and family…

“What surprised me the most about being a father…I would say just the fact that—how quickly they actually develop, and become walking, talking little human beings that are suddenly living with you until they’re at least 18! Where do I see myself in 10 years? Coaching baseball…and hopefully making great movies or great TV. Happily married, coaching baseball, and making great movies or TV.”

It must be tricky to navigate the waters of being a celebrity parent! What do you think would be the most difficult issue to tackle with fame and family?