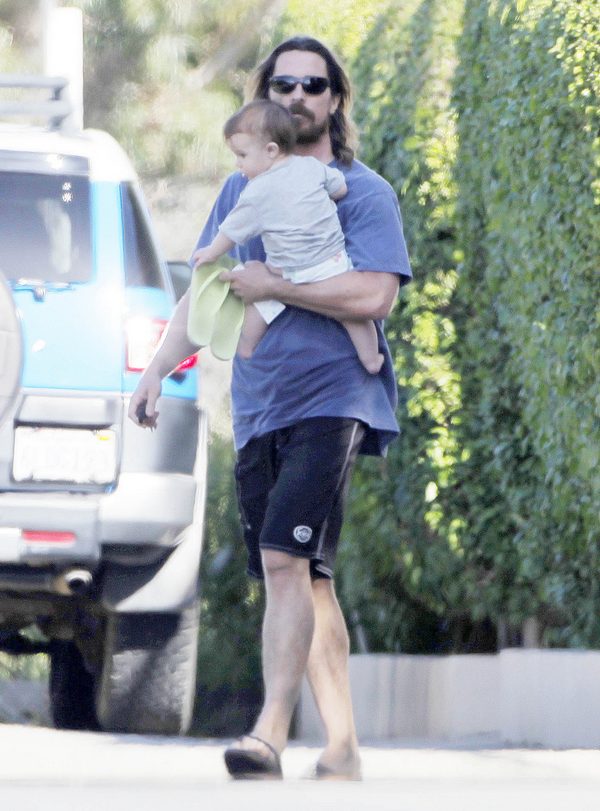 Christian Bale has been spending a lot of time with the newest member of the Bale family, his adorable 6 month old son. The family is notoriously private, and the tot’s birth was kept quiet. So quiet, the baby’s name is still a mystery!

After a globetrotting press tour, Christian has been spending a lot of time with his children. A few weeks ago, Bale was spotted having lunch with his son and nine-year-old daughter, Emmeline. FYI – her name has never been officially confirmed by the family.

This week, the ‘Exodus‘ star went on a father-son solo trip to visit a friend. This time Bale carried the tot in his arms, abandoning the stroller he usually uses to escort the cutie around. These two are too cute!

Christian doesn’t share much regarding his family-life, perhaps a wise move, but in 2010 he did reveal that his daughter brought him to a new level life. The former Batman revealed, “The last few years of my life have been spent just watching animation — for my daughter — and getting a kick out of that,” he said in an interview with Esquire. “I love anything that she likes. If she’s getting a kick out of it, I love it. I find myself tearing up at the most ridiculous things now, sitting next to my daughter while she’s watching a movie.“

He also noted why he is fiercely private and protective when it comes to sharing the personal details of his family life. “I’ve got incredible pride for my family. I’ve absolutely fallen into that cliché of a dad who could just happily talk about my daughter endlessly,” Bale gushed before closing the door. “But it’s not what I’m about in terms of being an actor. I don’t want people to know about that.“

Privacy is hard to come by and maintaining a balance of private life and public life isn’t easy. What do you think about the Bale family’s balance of fame and family?

Haylie Duff’s Baby Shower: All the Details and Photos!