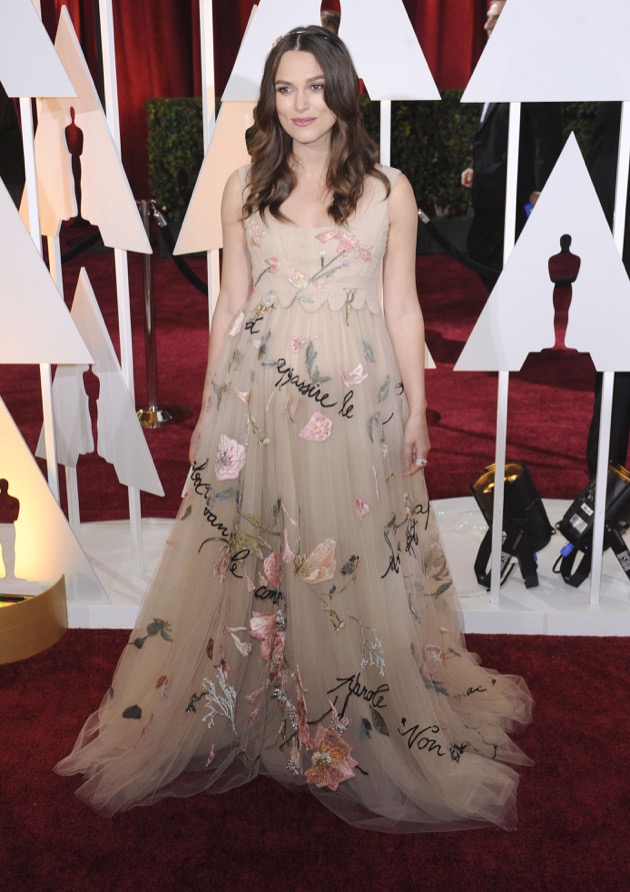 Keira Knightley who is pregnant with her first child looked amazing as she stepped on the red carpet last night [02/22/15] at the 87 annual Academy Awards.  Keira was wearing a Sping/Summer 2015 Valentino gown.  The gown was champagne color and embroidered with flowers and french phrases.  I just loved it!

Keira was nominated for Best Supporting Actress for her role in the Morten Tyldum-directed film, Imitation Game.  Keira recently sat down with Ellen DeGeneres and talked about her pregnancy and going to the Oscars.

She said, “I can’t drink. I’m up for an Oscar and I can’t drink at the Oscars. I went to the doctor – you have to get lots of doctor check ups when your pregnant – and she asked if I had any questions. And I said “Yes! When can I drink!? Please! I just want a margarita.”  It looks like Keira is going to have to wait a few more months 🙂

Although Keira has to abstain from drinking it looks like her husband James is making up for it, she said, “My husband’s having a great time. I’m eating for two and he’s drinking for two.  There’s a lot of free champagne, so he thinks because I’m not drinking the free champagne, he has to. So, all of it.”

Keira has been married to musician James Righton since May 2013.  On December 12th, 2014 Knightley confirmed through a spokesperson that she was pregnant with her first child.

What do you think CBLers are you loving Keira’s gown as much as I am?  Hit the comments and let us know your thoughts?