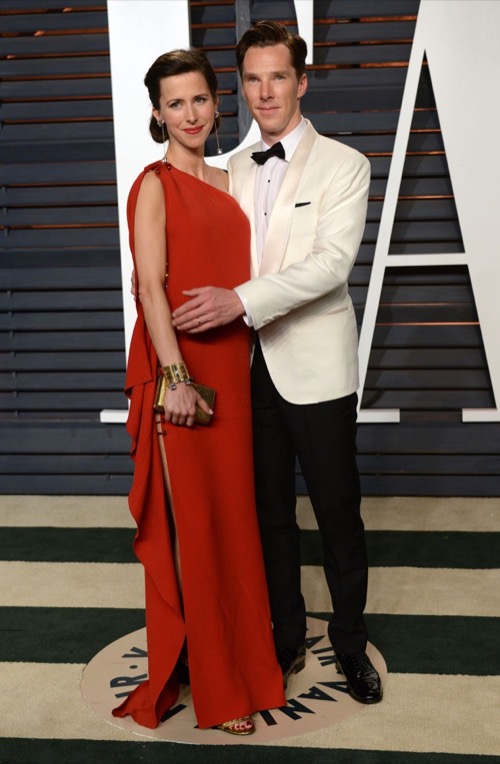 Newlyweds Benedict Cumberbatch and Sophie Hunter were both radiant on last night’s red carpet. We got a sneak peek at their little cumber-bundle as Sophie’s still modest baby bump was noticeable beneath her stylish one shoulder red frock. Cumberbatch and his baby mama have managed to do the improbable – they carried off a low key romance and announced their engagement in a small ad in The Times of London. Two months later they confirmed that they were “over the moon” about their pregnancy which had also been on the down-low. They wed on Valentine’s Day on the Isle of Wight.

Cumberbatch lost out on Best Actor at last night’s Oscars for The Imitation Game but if the baby pops out looking like the blue eyed leading man, it will be an imitation game of its own. Hunter is well known in England as a stage actress and director. She met Cumberbatch back in 2009 on the set of Burlesque Fairytales, a British thriller about the London theater scene, but they only began dating in 2013. The happy couple plans to remain in the UK rather than relocating to LA for movie work. Cumberbatch told Hollywood.com, “It doesn’t make sense to uproot my whole life.”

Now that the Oscars are put to bed, Ben (as his friends call him), is preparing for a couple of months of nesting with his wife in preparation for the baby and plans to take a break from acting after the birth of his child. Cumberbatch is now 38 but has said that since childhood, he had earmarked the age of 32 as when he wanted to father his first child.

Cumberbatch is set to wrap filming of season four of BBC’s Sherlock (an absolute to-die-for show if you haven’t seen it) by Spring but then has no projects slated until 2016 including Doctor Strange (Ben will play the title role), a Marvel universe movie and The Yellow Birds about the war in Iraq.

The couple has not yet announced the sex of their Cumberbaby, but here are a few baby names to consider:

Arthur Conan Cumberbatch (for the author of the Sherlock books)

Benedictine Cumberbatch (if it’s a girl, why not go for a version of her paterfamilias)