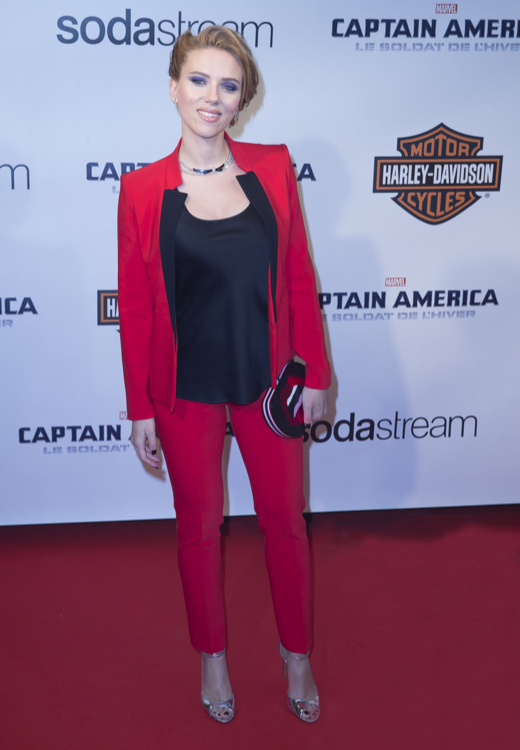 The pregnant actress dressed her tiny bump in a black silk blouse and bright red pants suit. She accessorized her red carpet look with a necklace, a clutch with a lip printed on one side and heeled sandals.

News broke at the beginning of the month, that Johansson and her fiance of six months, RomainDauriac, are expecting.

Johansson recently defended her decision to work with Woody Allen despite the sexual abuse claims by his adoptive daughter Dylan Farrow.

“I think it’s irresponsible to take a bunch of actors that will have a Google alert on and to suddenly throw their name into a situation that none of us could possibly knowingly comment on. That just feels irresponsible to me,” she told of Farrow’s open letter published in the New York Times last month.

She went on to say the allegations have never been proven at it’s all ‘guesswork’.

“I’m unaware that there’s been a backlash. I think he’ll continue to know what he knows about the situation, and I’m sure the other people involved have their own experience with it. It’s not like this is somebody that’s been prosecuted and found guilty of something, and you can then go, ‘I don’t support this lifestyle or whatever.’ I mean, it’s all guesswork,” she claimed, while adding, “It would be ridiculous for me to make any kind of assumption one way or the other.”

What do you think of Johansson’s response?