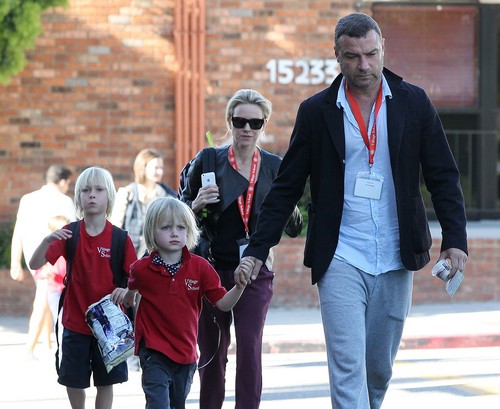 Ray Donovan star Liev Schreiber and Naomi Watts were photographed picking up their two sons six-year-old Sasha and five-year-old Kai from school in Pacific Palisades, California on March 10, 2014.  Casually dressed Naomi and Liev looked like any other parents picking up their boys.  The couple strives to put family first and the couple has said the weekend is sacred family time for them.  Naomi told Australian TV Show Today, “Sunday is called snuggle Sunday. It’s just a name. No one is allowed to go downstairs. We just snuggle and stay in bed for a while.  Saturdays we’re more social but Sunday’s a quieter day.”

Sasha and Kai could almost be twins with their blond hair, matching outfits and similar hair styles.  Naomi recently said when she wants fashion advice she goes to her boys.  She said, “Actually the boys’ opinions are often the most trusting ones because you feel like they have no agenda, they just call it like it is. My littlest one has a very good eye. He’s often been known to say, ‘Mummy that dress is horrible!'”

Meanwhile Daddy Liev is currently working on a new movie, “Pawn Sacrifice.”  The movie is about American chess champion Bobby Fischer as he prepares for a legendary match-up against Russian Boris Spassky. The movie also stars  Sophie Nélisse, Peter Sarsgaard, Tobey Maguire.  The movie is expected to be released in 2014.