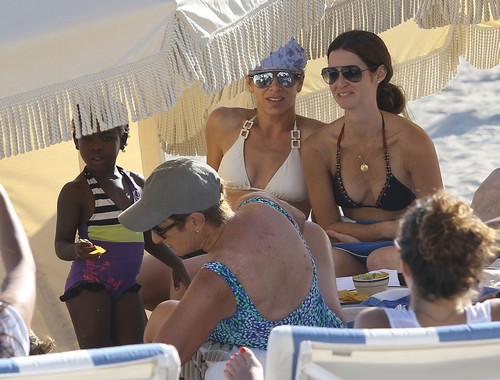 The Biggest Loser trainer Jillian Michaels and her partner Heidi Rhoades decided to head to the beach for some family fun time.  The couple along with their children 1 1/2 year-old Phoenix & Lukensia, enjoyed a beach day with family and friends on November 12, 2013 in Miami, Florida.

Everyone looked like they were having a fun time with both Jillian and Heidi giving the kids piggyback rides and spending time in the water with them swimming.  The couple are in great shape showed off their abs and wore bikinis and short, shorts to enjoy their family day.

Jillian has spoken about how she is teaching the children how to be healthy and enjoy fitness, she said, “We’ll get them doing activities they love, so fitness is fun.”   A day at the beach is just a prefect healthy activity.

Meanwhile, Jillian is one of the original trainers on the Biggest Loser, she started with the reality show in 2004.  During the course of the show Jillian has taken two breaks.

This week on the show Jillian caused a bit of controversy when she broke the rules on The Biggest Loser and caused her team to be penalized.  Jillian gave her team caffeine supplements without approval from the doctors. All the trainers know that this is not permitted and it is a huge rule violation. In lieu of what Jillian did, her white team was given a four pound disadvantage at weigh in and the blue team were given back their immunity from the week before.