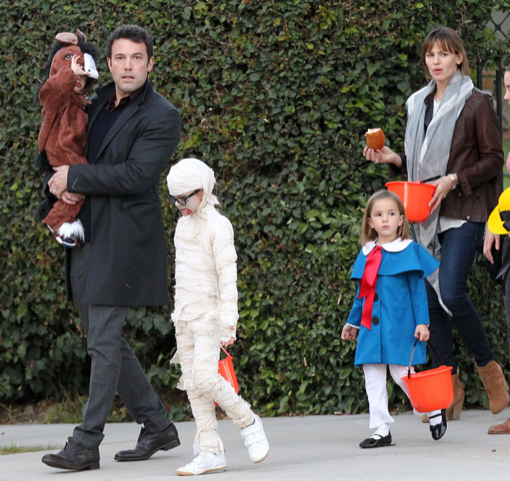 The married couple chose not dress up for the occasion, but their children went all out. Violet dressed as a mummy, Seraphina as madeline and Samuel as a pony.

Affleck who is set to star as the next Batman admits he was reluctant to take on the role.

“Initially, I was reluctant, as I felt I didn’t fit the traditional mold,” said Affleck to 411 Mania. “But once [director] Zack [Snyder] showed me the concept, and that it would be both different form the great movies that Chris [Nolan] and Christian [Bale] made, but still in keeping with tradition, I was excited.”

Meanwhile, Garner is in the midst of promoting her new movie alongside Matthew Mcconaughey, The Dallas Buyers Club.

Miranda Kerr Poses With Her Super Man For Halloween