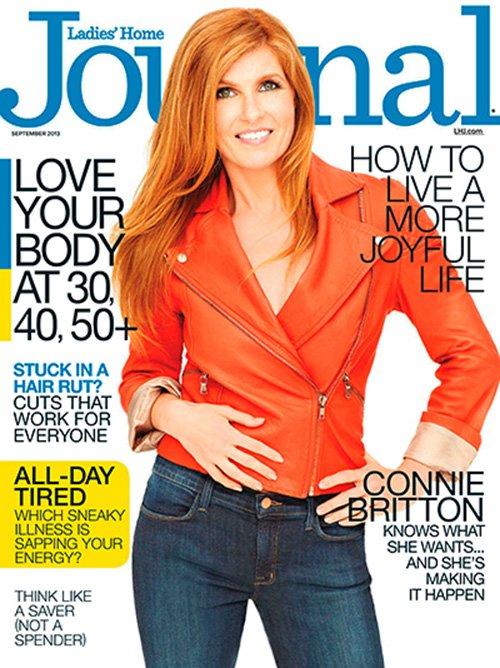 Appearing on the cover of the September 2013 issue of Ladies’ Home Journal, Connie Britton tells about her decision to adopt her son Eyob ‘Yoby’ from Africa in Novermber of 2011.

The divorced Nashville actress was unsure if she would have children, but after exploring her options she decided adoption was the right choice for her.

“I didn’t think I’d have a baby on my own. But there’s a lot that comes out of having a plan and then seeing that there’s another way you can go. If you hold hard and fast to the plan regardless of where you’re at, then you’re going against the flow of your life. My parents died within three years of each other and that’s when I thought, what am I waiting for?” she confides.

Connie decided adopting a child in Africa was right for her a after visiting the continent multiple times for charitable work.

“I’ve traveled to Africa a lot. I was working on a documentary about Ethiopian orphans for years. And I’ve worked on behalf of the African Children’s Choir, which promotes education. These kids have nothing, but they get such joy from singing. So I saw a real need there,” she tells.

The 46-year-old also takes about growing older in Hollywood.

“I think the 40s are a time when you can sit back into who you are and what you’ve learned. I’m able to challenge myself more because I have a stronger sense of who I am and what I can do. There’s a lot of rejection in this business. There’s a lot of focus on the way you look. For me it was never worth the sacrifice of my sanity to try and be the person I thought other people wanted me to be. Instead I tried to figure out early on what it is I have to offer. If somebody wanted that, then I reaped the rewards. If they didn’t, then I moved on.” she says.

To read the full interview pick up Ladies’ Home Journal on newsstands.