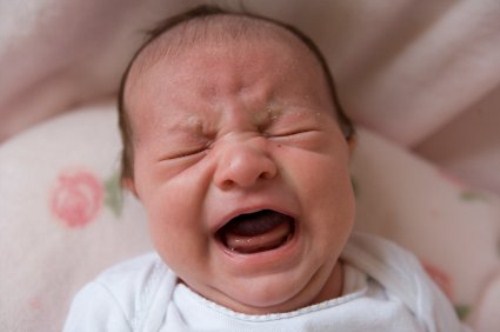 Newborns are tricky, they are about as unpredictable as the numbers for winning the lotto. What’s that you say? You figured your newborn out day one? Lucky.. For those of you who haven’t been able to figure out those newborn squeaks or are learning everything you can about them so when your bundle arrives you can figure them out, read on!

Crying + Fussing:
You will eventually learn your newborns individual cries and know exactly what cry means what, trust me. I know it sounds crazy but I can tell you 90% of the time any noise my kid makes (good or bad) and what they’re doing or why they’re crying. Our first instinct is to feed baby which may or may not be the right answer. Some other things to consider: temperature, wet diaper, gas, tired, bored. Some newborns find comfort in different things than others. For comfort try a pacifier or swaddling your baby. My son hated to be swaddled and he would scream his brains out if he was, so remember there is an exception to every rule. If you suspect gas, try laying baby on his back and working his leg in bike peddling motions, this will help him pass the gas. Talk with your doctor about different infant gas drops that are safe for newborns.

Vomit + Spitting Up:
All babies will spit up, if yours never did consider it a blessing. Babies have tiny tummies especially newborns (fresh out of the womb they’ve got the stomach the size of a marble!) so often time spit up is simply from a bit too much yummy bottle and they’re under mature stomach can’t keep it all in. Simple as that, no worries! However, if your baby is continually spitting up or acting fussy before, during or after spitting up there might be cause for concern. My son vomited from day one. He would throw up pretty much everything he drank just as soon as he was done drinking. It was a horrid cycle and frustrating for us that we didn’t “know” how to help him. We talked with our doctor about him possibly having Acid Reflux which is common in newborns, however he was never in pain or unhappy, just empting his stomach for the heck of it. We finally realized his issues were a lactose problem (despite there being any milk allergies in the family). Once he was on soy, problem fixed! The default thought on a newborn who regularly spits up is Acid Reflux. If baby seems exceptionally fussy, prefers being on his tummy rather than flat on his back, loves being held and screams when laid down, vomits after feedings (breast of bottle), it could be Acid Reflux. Talk to your doctor about your options and how to help baby get relief. I will say this though, my daughter had AR at a very early age (2 months of screaming before we figured that out!) and never once spit up due to the Acid Reflux. Our doctors kept telling us it wasn’t likely AR because she wasn’t spitting up, boy were they misled! Again, exceptions to every rule!

Different Stool:
Newborn poop has a mind of it’s own. You won’t start seeing a regular looking bowel movement until baby starts eating food, up until that point, it will go through many changes. I’ll spare you the lovely photos however I want to describe (within reason) what a normal bowel movement can include on a healthy newborn:
-Colors: Newborn poop can range in colors from black to yellow to green to brown. You will go through stages of colors as baby grows and matures. The black tar poop is totally normal the first few days. I had always heard people talk about it but until I actually saw it I was super unaware just how icky it was. My kids had more of a dark green/black rather than a solid black. This deep color will usually wear off around a week. and baby will then show a more light green/yellow stool. Breastfeed babies and formula feed babies will show different loads in their diapers and it will show a more light green/yellow stool. It’s okay to see white flecks in your breastfeed baby’s stool- it’s normal. Formula fed babies will have a more brown/tan stool. Remember that if you’ve giving baby any supplements (such as iron) their stool is likely to reflect that: extra iron can cause a more black/dark green stool. If your baby has odd colors and is not receiving any supplements it’s best to check with the doctor. Any blood in baby’s stool is not a good sign, talk to your doctor about what you should do next.
–Smells: Breast fed baby’s stool will smell less offensive then formula fed babies. Mom’s milk is much easier on the tummy and the digestion process. Once baby starts eating solids (baby food even) the smell will change along with the color, again. I can always tell you what my kids had dinner the night before any bowel movement.
-Texture: This is an important thing to keep in mind. Breast feed babies will have a runny texture. Often times it can resemble diarrhea and can cause people to worry, chances are it’s just fine. Formula fed babies will have a thicker (not harder) texture. It won’t be as runny as breast fed babies but in those early stages it should be very soft and peanut butter consistency. If baby is straining or stool is hard (more adult like) then you’ll want to talk to your doctor about options she might just need a little extra liquid in her diet to help. My daughter had very hard stool early on and once we changed her formula from the one she was on it was not a problem. However, we considered giving probiotics to help digestion. Thankfully we found a different formula that did the trick for her. My son also had a very hard stool but his was due to the lactose issues- which is not the normal. Most kids who have an allergy issue will develop diarrhea not be stopped up.

All babies react and respond differently to everything. No two babies are (usually) the same. Keep in mind that newborns can be frustrating and understanding their cues will come with time. Even the most experienced mother can be thrown a curve ball and have a baby act differently than any others. Everyone will have advice for new and seasoned mothers and although the advice isn’t bad take it with a grain of salt and know people want to help. You’ll learn your newborns signs eventually, I promise!