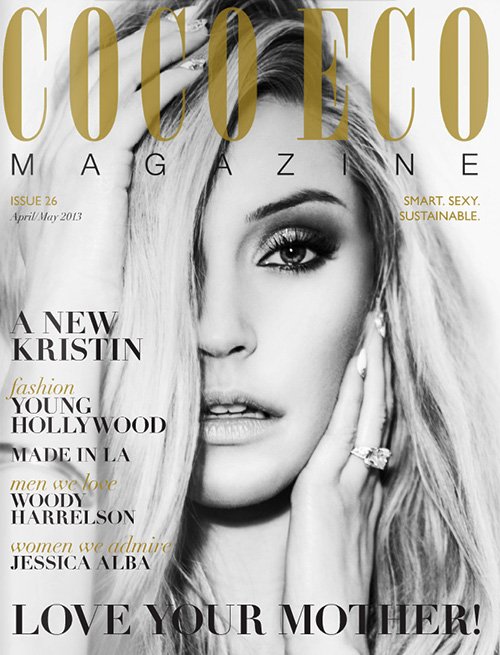 Kristin Cavallari covers the April/May 2013 issue of Coco Eco magazine while opening up about her fiance Jay Cutler and their 8-month-old son Camden Jack.

The actress who has successfully launched a shoe line with Chinese Laundry admits that she has made career sacrifices, so she could be closer with her family.

“I’ve passed on a couple of things that would have kept me here in LA because my fiance Jay has to be in Chicago, so if I was here we would never see each other. The sacrifices we make for love…”

Kristen feels like it’s all worth it though because her family is the most important thing to her.

“It’s easy to get wrapped up in your career and have that be your only focus, and I want my marriage to work and last — and family comes first,” she says. “The design work is great because I can do most of it from Chicago and I have so much fun with it. I love it and it all works out.”

The designer insists she has always maintained a healthy lifestyle, but when she became pregnant she became even more conscious of what she ate.

“My dad is a big health-nut so I’ve always tried to be as organic as possible, but when I became pregnant I took it to a whole new level and was even more conscious of what I was putting in my body,” she shares. “I gained 25 pounds which is what I was supposed to gain, and since then I have been choosing more of a plant-based diet. I work out four times a week and just try to live healthy.”

Pick up the magazine on newsstands now to read the full interview.