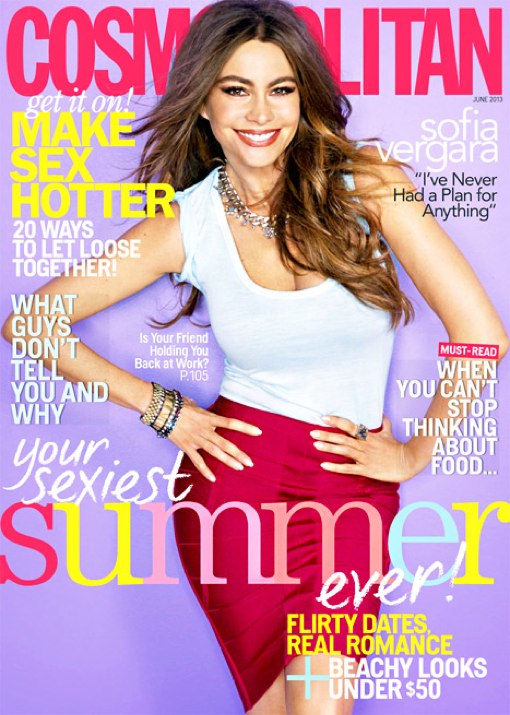 Looking stunning on the cover of the June 2013 issue of Cosmopolitan magazine, Sofia Vergara opens up about her desire to have a baby some day with fiance Nick Loeb.

Despite wanting a baby, The Modern Family actress admits she hasn’t exactly decided when she will.

“I’ve never had a plan for anything. I know I’m not going to get any more shows like Modern Family. If it ends in five years, it would be great to do movies and focus on things like my Kmart line,” Vergara says. “Maybe have a kid. But I am going to be working my whole life. I love making money. I really love it!”

Although, she has froze her eggs in the hopes of one day having a baby using a surrogate.

“My doctor had told me, ‘We have a small window.’ I said, ‘That’s so rude!’ I already have a kid, so I never thought I would need to do that,” says the mom to son Manolo Gonzalez, 21. “But I will have to use a surrogate, because I had thyroid cancer and lots of radiation. I don’t want to wait forever, but not yet, because I’m working like an animal.”

For the full interview, pick up the June issue of Cosmopolitan on newsstands May 7.