Snooki Wants Another Baby but Thinks Pregnancy is Disgusting 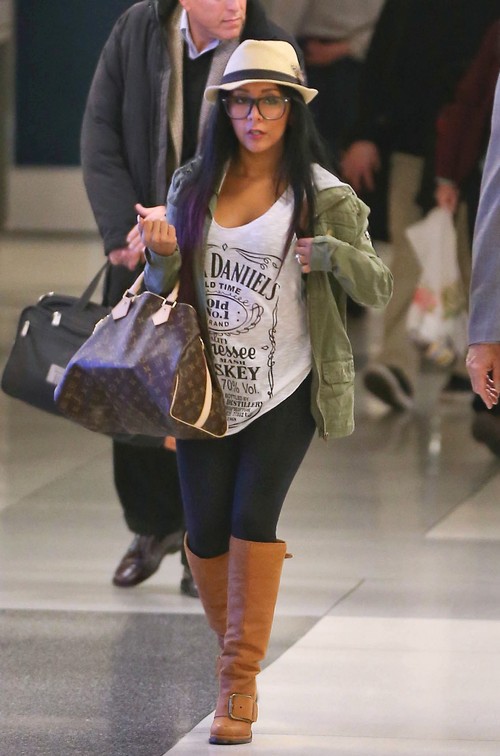 Jersey’s Shore‘s Snooki, who gave birth to her first child a boy August 26, 2012 has spoken out about being pregnant.  Snooki said childbearing is not the joy everyone says it is, it is actually disgusting.   Snooki went on to say people make a big deal of it and say how much fun and glamorous it is, but she hates pregnancy, but of course loves the reward at the end.

Snooki was commenting on whether she was ready to have another child and she said, “Yeah, I want one right now, but it’s just not the right time.  We’re gonna try to plan this one.”  Snooki was at LAX alone, her son Lorenzo LaValle and her partner Jionni LaValle were no where to be seen.

Our sister site Celeb Dirty Laundry has more to say on the matter.  Check out what they have to say HERE!

Snooki lost an whopping 42 lbs just seven months after giving birth to baby Lorenzo.  She was showing off her new swelve figure as she was chilling at LAX in black tights, sky high heels, a blazer, see-through blouse and a leopard print bra.

Snooki is headed to LA to work on her new clothing line where she hopes to add maternity wear into her collection.  I can just see it now leopard print maternity dresses.

Snooki has also said she wants a boob job, to find out all about he plastic surgery she is thinking of getting, go HERE!

What do you think CBLers are you going to be headed out to buy Snooki maternity wear?  Hit the comments and let us know your thoughts.