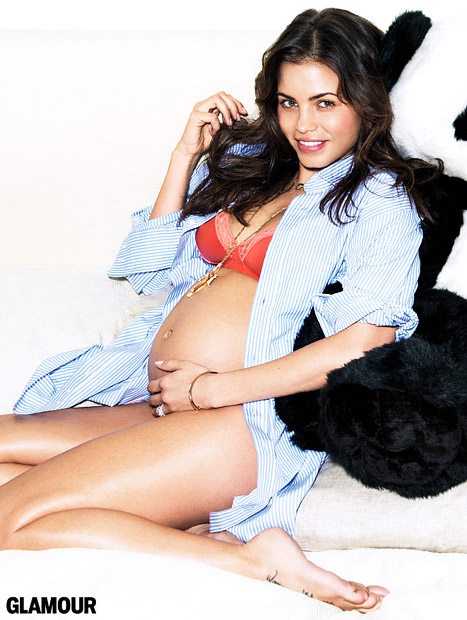 Inside the may issue of Glamour magazine,  Jenna Dewan-Tatum bares her baby bump while opening up about being pregnant and her relationship with husband Channing Tatum.

In one shot, The Witches of East End actress wears a red bra top and blue-and-white striped dress shirt as she snuggles up against a giant stuffed panda toy.

“I thought my body was going to change so quickly with pregnancy that I’d freak out. But it was really gradual,” she told the mag. “There’s a reason women are pregnant for nine months; by the end, you’re ready to have this baby.”

Jenna admits she doesn’t know what type of parents her and Channing will be, but so far her husband has been amazing.

“Channing has been great,” she continued. “He takes the route of no confrontation, just support, saying things like, ‘Do whatever you want! What do you want to eat? I’m going to leave it up to you.'”

“Who knows what kind of parents we’ll be? We have two dogs, so we’ve had some practice!” Dewan-Tatum said. “And as soon as this baby comes into the world, Channing and I will figure it out real fast.”

The parents-to-be met in 2006 on the set of dance flick Step Up, and married three years later.

“Most actors and actresses are consumed by careers and getting ahead,” she said of how they make their marriage work in Hollywood. “Channing and I are ambitious, but our relationship comes first. We take everything day by day, saying, ‘OK, how can we make this work together?'”

Jenna is expected to give birth in London, England later this Spring.

Snooki Wants Another Baby but Thinks Pregnancy is Disgusting