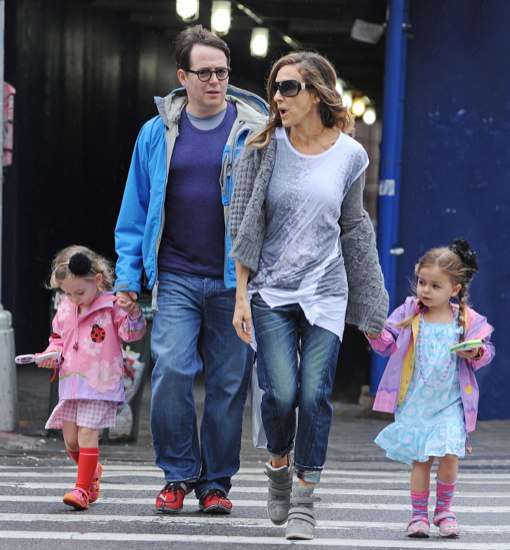 The Sex and The City star was the early riser of the two and took their son James to elementary school first on the damp day. Later, Matthew came along to take Marion & Tabitha to preschool.

Sarah is heading back to to Broadway in play The Commons of Pensacola.

Written by actress, Amanda Peet, the show centers around a woman (played by Blythe Danner) “forced to leave her life behind when husband’s Wall Street scam became headline news. When her daughter Becca (Sarah Jessica Parker) and Becca’s filmmaker boyfriend pay Judith a visit to the one bedroom condo Judith now occupies in Pensacola, Florida, everyone’s motives are called into question.

The Commons of Pensacola will begin previews Oct. 22 and officially open Nov. 21 at the Manhattan Theatre Club at New York City Center – Stage I.