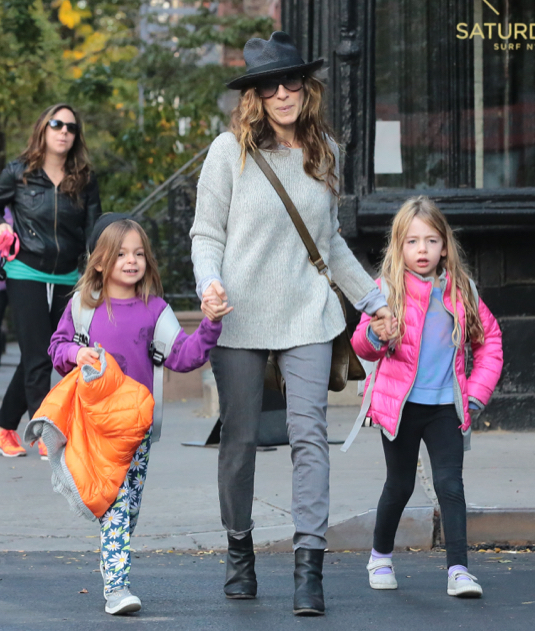 The Sex and the City star was dressed in a grey knit sweater, matching jeans and black booties. She held the hands of both her daughter’s while crossing a street.

Parker recently reflected upon her iconic character Carrie Bradshaw and if she and her are similar.

“I think in many ways I’m like Carrie because I would much prefer to be interviewing you, for instance. I’m very curious about other people, and that’s why I like the subway. Because I can just watch people. And that’s why I like cities. And I love this city, and I have a fondness that is kind of hard to explain to people, so I can relate to that,” she told Buzzfeed, adding, “I think there’s not a lot about Carrie that is actually similar to my life. Our choices have been so radically different. There are certain kinds of pillars that fundamentally are different,” she continued. “I like clothing, but I don’t have anywhere near a fevered relationship that she does.”

In other news, Parker is celebrating the 10-year anniversary of her popular fragrance, Lovely.

Celebrate the Coming of Winter: Polar Bear Craft For Kids