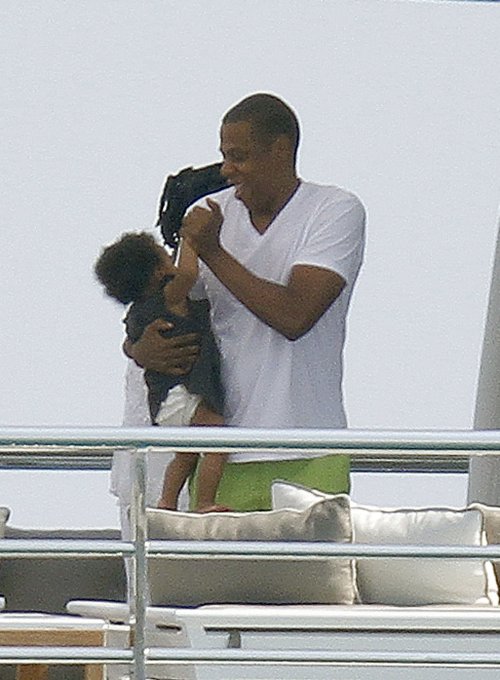 The most fabulous little girl in the world – Beyonce and Jay-Z’s daughter Blue Ivy Carter turns one today. It seems like just yesterday when Beyonce broke the news at the VMAs and revealed her growing bump. For a child born to internationally famous parents, it’s surprising how surprisingly little we’ve seen of her. Most photos of Blue have come from her Mom and Dad’s Tumblr, Twitter and Instagram accounts. Paps have had little luck of getting close enough to the tot to snap any cover shots of Blue.

To celebrate the birth of his daughter, Jay-Z released Glory which featured background tracks from Blue Ivy in her debut single. And the superstars, together worth almost $700 million, declined to sell their baby photos – even though they could have scored millions for the pics. Instead, they launched a Tumblr – helloblueivycarter – to introduce their precious daughter to the world.

This time last year, rumors abounded that Jay and Bey had rented out an entire wing of Lenox Hill hospital for their highly anticipated arrival, but this turned out to be yet another rumor about their high profile pregnancy. Other rumors were that they were using a surrogate and Bey was wearing a prosthetic baby bump. There was a video that claimed you could see Bey’s bump fold up as she stood. Other rumors were that she was artificially enhancing her bust line to substantiate her fake pregnancy. One tabloid even found a cousin of Beyonce to admit the whole pregnancy was a scam.

One year after her much talked about birth, Blue Ivy Carter is very much real, seems very much to have been actually birthed by songbird Beyonce and is much loved by her uber-famous parents. As she turns one today, I wonder what Jay-Z and Beyonce have planned for their beautiful baby girl. Will it be a low key family celebration on a yacht or a more high profile party with famous pals Kim Kardashian, Kanye West, Gwyneth Paltrow and Chris Martin?

I also wonder what sort of fab gifts this little hip-hop princess is in store for? Will it be mini-Louboutins? Tiny Lanvin furs? I can’t wait to hear. Happy birthday Blue Ivy Carter!