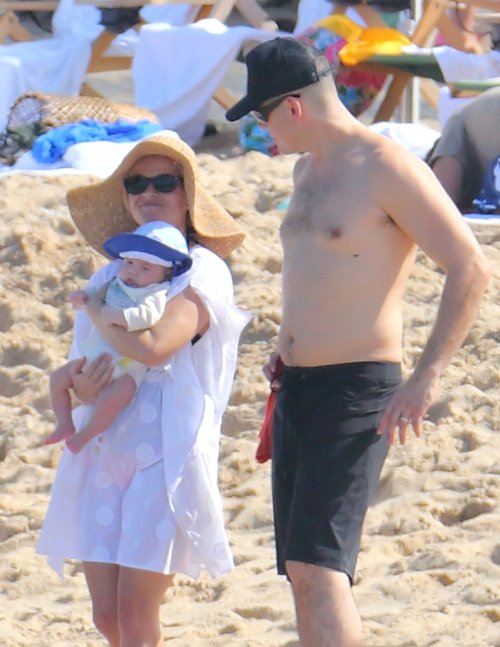 Reese Witherspoon and her family have been welcoming the New Year in sunny Hawaii. After admitting on her BFF Chelsea Handler‘s chat show that Tennessee Toth is a redneck name, she’s taken her little hick on vacay with the rest of her clan to ring in the new year far from his namesake state! Hitting the beach in the Aloha state, Reese looks like she’s gradually taking off the baby weight – thankfully she’s not one of those alien women that can give birth one day and walk a catwalk the next.

Reese was rocking a modest full cover blue bathing suit that keeps her covered but shows she’s still got a few lb’s to lose before she’s red carpet ready. She looks like a normal happy mom! With her in Hawaii is her hubby and dad of Tennessee, Jim Toth. 13 year old Ava Phillipe and 9 year old Deacon Phillipe (Reese’s kids with ex Ryan Phillipe) were also ocean-side with their mom and little brother to celebrate 2013. The new parents took turns toting little Tennessee and snapping lots of holiday pics with his older siblings.

When it comes to her baby weight, Reese told Extra TV, “I don’t know if I’m bouncing back. I’m slowly crawling back.” You can see her thighs are not yet toned and there’s still some baby fat around her middle, but come on – this is her third kid. I think her post-partum weight struggle is one of the reasons we moms identify with her when she’s on the big screen. I love Angelina Jolie, but I don’t think she gained an ounce of pregnancy weight on her body. She’s also popped out three kids, but remains model thin. (jealous)

Reese gave birth in September but is already gearing up to get back to her busy acting schedule. She’ll be promoting Mud – a drama she co-stars with Matthew McConaughey – himself a new dad – that opens in April 2013. Then she’s got three more films in the queue to shoot this year. Crime drama Devil’s Knot will be filmed in Georgia (that should make Southerner Reese feel right at home). Drama Big Eyes about painter Margaret Keane hasn’t scheduled shooting dates yet. Disney backed film Wish List is also slated to shoot in 2013!

Wow! I don’t know how she has time to make all those movies and be such a good mommy. You go girl!