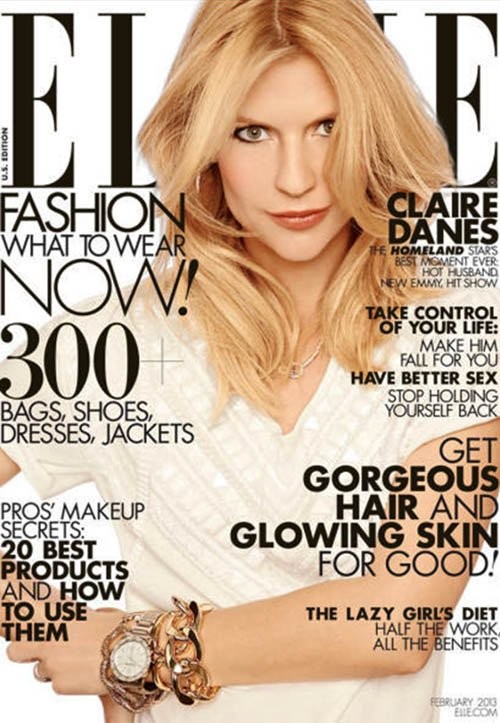 I always love it when new, celebrity first-time moms give interviews about their perspective on starting a family. Claire Danes has been acting for about 20 years now and it obviously is one of the truest loves in her life. I am, to this day a huge fan of the critically acclaimed, My So Called Life. You know, the teen angsty series that shot Claire to near instant fame? Flash forward a few decades and the actress can now be seen winning rave reviews for her role as a CIA analyst in Homeland.

Claire has been married to Hugh Dancy for a handful of years and in the February issue of Elle she tells readers that, while the couple works hard to maintain a great relationship, it all just kind of works. They are very lucky and they seem to know it. Her marriage and career are both pretty enviable and the star told the magazine why she has held off on having kids until now.

“I’ve always wanted to have kids, but I’m glad I didn’t until now. When I was thinking about [working and being a mother] originally, I was really nervous about it…I think I would make a lousy stay-at-home mom. It just wouldn’t suit me. I feel so fortunate, in that I’ve had this arrow-straight focus…that I wanted to act.”

Luckily, she waited until she nailed down a hit series so that no doubt once her new-mom feet are under her she’ll be able to juggle her baby and her job like a pro. Being a stay at home mom is probably the hardest job around and some women really do better if they juggle a job as well. That probably sounds crazy if you don’t understand the mindset, but obviously Claire already knows what is in her best interest.

Do you thrive on being an at home mom or are you someone that feels better balancing the work world into your everyday life? Tell us your thoughts in the comments below!