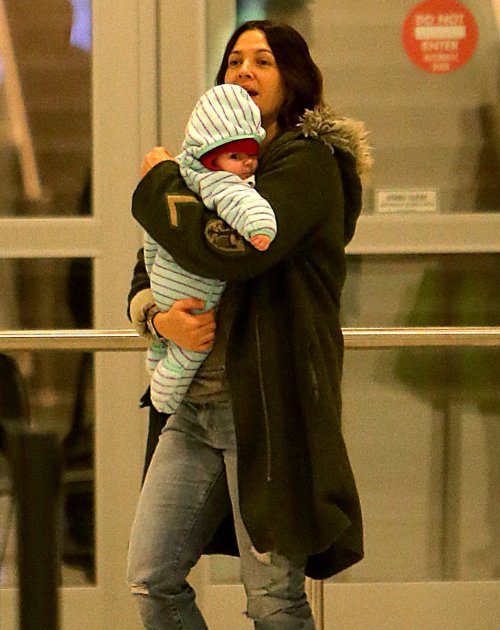 Ever since Drew Barrymore gave birth to daughter Olive back on September 26th, we’ve seen little of the tyke. For public outings with husband Will Kopelman, they’ve had Olive tucked snug in her baby carrier with a blanket tenting her keeping her out of sight. Drew did grant an interview to People and allowed them some photos – including a cute cover shot – of their growing family, but casual photos have been hard to come by. But today, US Weekly released a photo of little Olive, all bundled up against the New York City cold as she arrived at JFK with her mom. Drew is looking slim – seems the only baby weight she’s carrying is that cute little daughter of hers!

You have to give Drew credit for keeping her child out of the limelight. As a child star who suffered drug addiction and a whole host of emotional problems that come with too early exposure to Hollywood, I’m predicting Drew will keep Olive sheltered. Back in October, a few days after she gave birth, Drew issued this statement: “We are proud to announce the birth of our daughter, Olive Barrymore Kopelman, born September 26th, healthy, happy and welcomed by the whole family. Thank you for respecting our privacy during this most special time in our lives.“

Since then, other than the People interview, she’s been on full time mom duty and loving it! I’m sure protecting her daughter from the kind of childhood she has is utmost in her mind. Here’s what Drew told People, “I can’t wait to pick her up from school — just being in the line of cars when she gets out. I want her to live a life where she knows we will be there. That is everything to me. That is what I wanted most when I was a kid, and it’s what my kid will have.“

But just because she’s trying to keep her little Olive under wraps as much as she can doesn’t mean she’s not willing to brag. On a December visit to The Ellen DeGeneres Show, Drew said, “I count my lucky stars every day because she is really interactive and happy and like nice to people. She’s a nice person.” Check out all the sweet things she has to say about her delicious little Olive in the Ellen clip below. Enjoy!